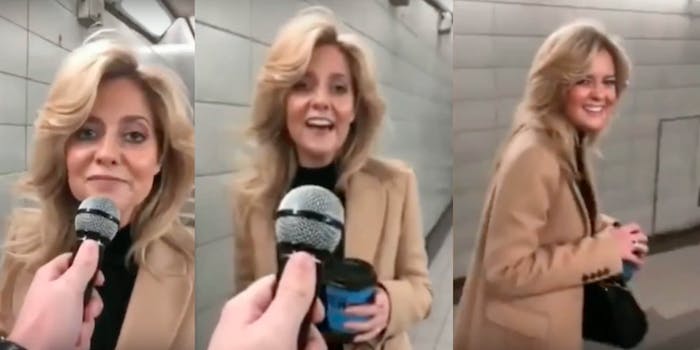 A star has been born.

One woman is diving into Instagram fame after a video of her singing Lady Gaga’s “Shallow” in a subway station went viral this week.

Charlotte Awbery appeared to be commuting in a subway station when comedian Kevin Freshwater approached her and asked her to finish the lyrics to “Shallow” from A Star is Born.

In the video, Awbery gives a flawless performance without breaking a sweat. Concluding her performance, Freshwater says, “Wow, you’re amazing.”

The video, posted on Feb 18., has over 20 million views and counting.

TODAY reports that Freshwater said he is grateful to have a platform to be able to showcase her “amazing talent to the world.”

“I was blown away and lost for words,” Freshwater told TODAY in an email. He said she “seemed like such a genuine and loving person.”

“Have we done a screening for racism? I’m ready to stan,” Twitter user @fonzfranc wrote.

There’s a viral joke circulating claiming that Awbery joined the Pussycat Dolls. Even the girl group, who recently got back together, responded to the claim.

Some users are skeptical of the viral video, tweeting “there is zero chance” that the video is not staged.

Regardless, one user said they were already having dreams about the “random subway lady singing ‘Shallow.’”

Awbery did not immediately respond to the Daily Dot’s request for comment.