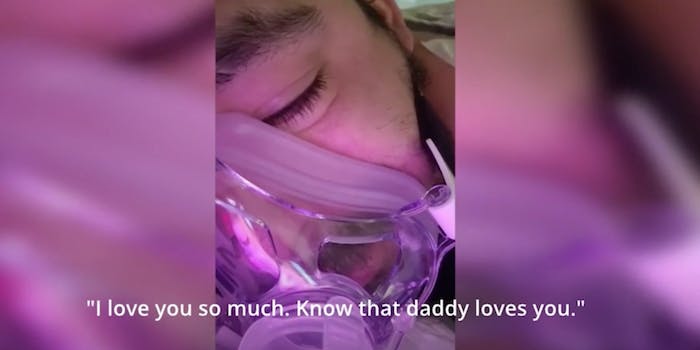 ‘Take care of your mother’: Dad leaves heartbreaking video for his children before dying of COVID

'Know that daddy loves you.'

A Texas dad recorded a video from his hospital bed while dying from the coronavirus. He wanted to leave behind a message for his kids.

Charles “Charley” Torres, a 35-year-old father of three and stepfather to four, filmed the heartbreaking video two weeks before his death, on Valentine’s Day. “I love you with all my heart,” Torres says in the video. “I love you so much. Know that daddy loves you.”

He then tells his seven children—three of them under 6 years old—one by one that he loves them and asks them to take care of their mother, Ana.

“Take care of your mother. I love you. I love you so much,” he says, speaking through a mask.

Torres’ father, Alex, told FOX Television Stations that Torres “wanted to make sure he left something for the kids just in case that things started going wrong.”

Alex said Torres, who has reportedly been suffering from bouts of pancreatitis since 2010, went to the emergency room in mid-January with a fever, believing he was suffering from another episode. He was placed on a ventilator and diagnosed with COVID-19. “He went in and never came out,” Alex told KTRK-TV.

Torres’ family doesn’t know how he contracted the disease.

Torres, a volunteer firefighter and FEMA disaster assistance specialist, was from Manvel, Texas. Torres is reportedly one of the 43,000 Texans who have succumbed to the disease.

Despite the deaths and the fact that over 2.3 million Texans have tested positive COVID-19 so far, Texas Gov. Greg Abbott controversially announced that he was lifting the statewide mask mandate and letting businesses reopen at full capacity. “It is now time to open Texas 100%,” Abbott said at a press conference on Tuesday.

According to KHOU, only 6.8% of Texas’ population has been fully vaccinated.

Torres was the sole provider for his family, according to ABC 7. A GoFundMe was set up for Torres’ children and has since raised over $16,000. “With him gone, life has hit his family pretty hard,” the GoFundMe reads.