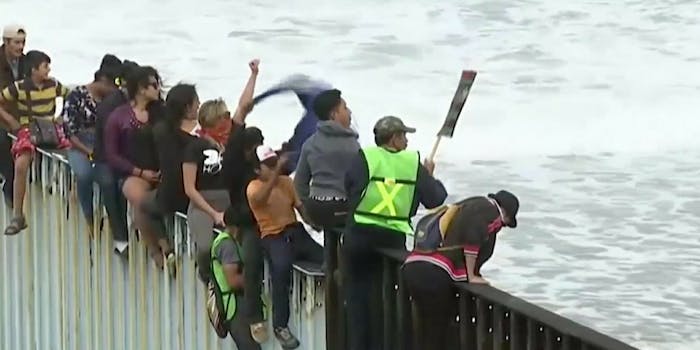 8 migrants from caravan allowed to enter U.S., apply for asylum

Nearly all of them are women and children.

Eight members of the caravan of Central American migrants who traveled through Mexico to the U.S. have been allowed to apply for asylum after a day’s wait at the San Ysidro border crossing, BuzzFeed News reported.

The migrants, originally a caravan of 1,200 to 1,500 that left the Mexican state of Chiapas in March, began arriving at the border crossing on Sunday night. However, the first group of about 40 people were told that the border crossing, with a max capacity of more than 300 people, didn’t have room to take in one asylum seeker who had come to the U.S. to escape violence and political oppression. Border authorities said migrants could wait at the crossing until room was made as authorities processed previous applications.

As a result, many of the migrants chose to spend the night outside the San Ysidro port of entry, refusing offers to be ferried to shelters in order to keep pressure on immigration authorities to process them.

Immigrant rights advocates at the border say migrants seeking asylum are commonly told there is no room to process them by Customs and Border Protection and they have to wait. This is what it looked like inside the port of entry last night. pic.twitter.com/PsbmscAPIb

Activists with Pueblos Sin Fronteras, the group that organized the caravan, criticized authorities for not being prepared for the influx of migrants, stating that public officials, President Donald Trump included, were aware of the approaching caravan for weeks. Trump has deemed the caravan a national security threat and has vowed to close “legal loopholes” of “catch-and-release” that allow asylum seekers to remain in the U.S. while their cases are vetted.

Despite border patrol’s insistence that the facility was at capacity, days prior Homeland Security Sec. Kristjen Nielsen said in a statement that the agency was sending “additional asylum officers, [U.S. Immigration and Customs Enforcement] ICE attorneys, [Department of Justice] DOJ Immigration Judges, and DOJ prosecutors to the Southern border.”

The eight Central Americans include three mothers, four children, and an 18-year-old man, BuzzFeed News reported. A member of Human Rights First said that when U.S. Customs and Border Protection (CBP) approached the waiting migrants to process eight applications, they were given no time to choose which eight of the waiting 20 to go forward, and were told to go with women and children first.

Pueblos Sin Fronteras told the publication that it was told by CBP that processing asylum seekers usually takes one to two days at the San Ysidro crossing, which is one of the busiest U.S. ports along the southern border. It sees an estimated 90,000 people crossing into the U.S. daily, about 20,000 of those people on foot. An estimated 200 caravan members are expected to eventually apply for asylum, though it’s unclear how quickly those applications will be processed. BuzzFeed News reported that CBP also turned away other people applying for asylum who weren’t part of the caravan on Monday.