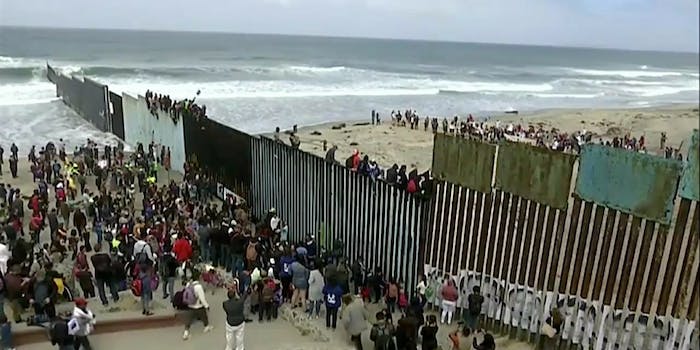 About half of the caravan's migrants are children.

An estimated 40 people who have traveled through Mexico as part of a larger caravan of Central American asylum-seekers have been denied entry into the U.S., BuzzFeed News reports.

The caravan, which began with an estimated 1,200 to 1,500 people in March, started arriving on Sunday, with an initial 40 having presented themselves to the San Ysidro Port of Entry, south of San Diego. However, U.S. Customs and Border Patrol (CBP) have denied entry to caravan members who say they’re escaping violence and political oppression in their countries of origin.

BuzzFeed News reported that CBP has stated the port is at “capacity” and migrants “may need to wait in Mexico as CBP officers work to process those already within our facilities.”

The Associated Press reported that nearly 200 migrants have been stopped at the border port in total, though the initial 40 have been allowed to walk through the port and are currently waiting outside the building “technically on Mexican soil.” Another 50 have made a camp of blankets and backpacks on the Mexican side of the port, in Tijuana.

The San Ysidro port is the nation’s busiest border crossing, the AP reported. An attorney with Al Otro Lado told the news service that the specific port is capable of taking in 316 asylum-seekers at any given time, though a CBP spokesperson chose not to comment on the port’s capacity to BuzzFeed News. According to the AP, the agency processed about 8,000 asylum cases between October and February.

The 150 to 200 asylum seekers are still lining up and getting ready to head to the port of entry. pic.twitter.com/D8JS314vkc

The caravan is now minutes away from the port of entry in Tijuana. pic.twitter.com/nnA4CYWlw2

The US Government is not allowing asylum seekers from the #RefugeeCaravan in, claiming the port of entry is at capacity. Sad that a police force that can round up & detain thousands of immigrants a day isn’t willing to process 200 refugees.@latinorebels @ACLU @wrcommission pic.twitter.com/QLTb08D3Gz

U.S. law requires asylum-seekers be given a fair trial, with those fearing the return to their country of origin to be held during a months-long vetting process. President Donald Trump, meanwhile, has deemed the caravan a national security threat and has vowed to close “legal loopholes” of “catch-and-release” that allow asylum-seekers to live in the U.S. while their case runs its course. About half of the migrants with the caravan are children.

“They have been well aware that a caravan is going to arrive at the border,” Nicole Ramos, an attorney working for caravan members, said at a press conference. “The failure to prepare and failure to get sufficient agents and resources is not the fault of the most vulnerable among us. We can build a base in Iraq in under a week. We can’t process 200 refugees. I don’t believe it.”