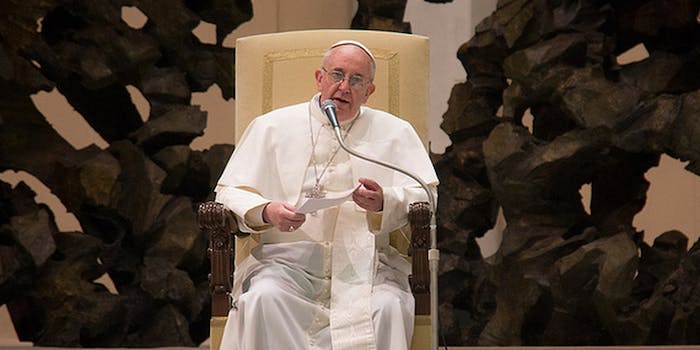 Indulgences are on offer for any believer who tunes into Catholic World Youth Day on Twitter next week.

Looking to reduce the time you spend in purgatory? There’s an easy solution: Follow Pope Francis on Twitter.

The pontiff, elected in March, isn’t quite turning to daft schemes like buying followers. Instead, the head of the Catholic Church is offering “indulgences” to his Twitter cadre.

Essentially, the Church will “reduce the time Catholics believe they will have to spend in purgatory after they have confessed and been absolved of their sin,” the Guardian reports.

No one really knows how long one spends in purgatory before going to Heaven. Typically, Catholics earn indulgences for carrying out specific tasks like climbing the Sacred Steps in Rome to reduce the wait to get into paradise by seven years.

Attending next week’s Catholic World Youth Day, in Rio de Janeiro, can also earn people indulgences. However, for those who can’t make it to Brazil, the Vatican has also offered the privilege to those who follow along on TV, radio, and, yes, social networks like Twitter.

“But you must be following the events live. It is not as if you can get an indulgence by chatting on the Internet,” a source from the Vatican’s apostolic penitentiary, a court which deals with the forgiveness of sins, told the Guardian.

There’s a slight catch: Those seeking an indulgence through following the Rio event must also have previously confessed and be “truly penitent and contrite.”

“What really counts is that the tweets the Pope sends from Brazil or the photos of the Catholic World Youth Day that go up on Pinterest produce authentic spiritual fruit in the hearts of everyone,” said the head of the pontifical council for social communication.

Reading between the lines a bit, it seems the Vatican really, really wants you to pay attention to the tweets and retweet them if you’re so inclined. One of the main reasons the papacy got onto Twitter (Francis’s predecessor, Benedict XVI, was the first Pope to tweet) was to spread the word of Catholicism.

If the Pope’s more than 7 million followers across his multiple Twitter accounts are joined by others seeking indulgence, we might be seeing a lot of retweets from Catholic World Youth Day in our feeds next week.