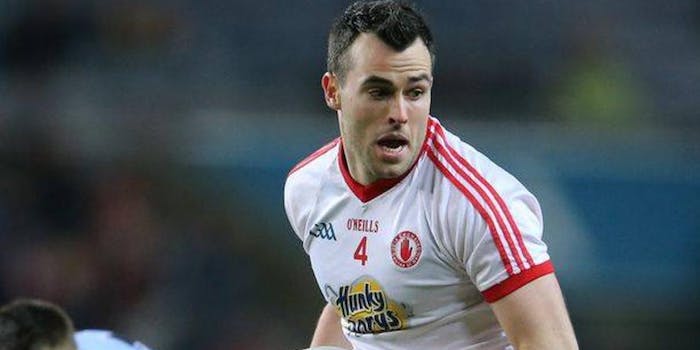 McCarron allegedly appeared in two gay adult films under the pseudonym “Fergus” for TheCastingRoom, a gay-for-pay adult website (meaning that most of its stars are straight men who will perform sexual acts with other men for the camera).

The description for the clip reads: “Big strapping footballer Fergus grew up in a rural area where sexual adventures were limited. Now that he’s living in the big city he wants to try it all!” It seems that the videos have since been wiped from TheCastingRoom, but you can check out the very, very NSFW stills if you’re interested.

Since the videos started circulating on Twitter last Wednesday under the hashtag #fergus (McCarron’s alleged pseudonym), McCarron has not publicly acknowledged that he is the performer in the videos. Nonetheless, he’s been deluged with a series of homophobic taunts, threats, and “jokes,” prompting him to shut down his Facebook page earlier this week.

This is not the first time McCarron has made headlines in Ireland and the U.K. Last October, it was revealed that McCarron was struggling with a gambling addiction, and earlier this month he temporarily lost his ability to move or speak after suffering a nasty blow to the back during a match.

If McCarron is good at his job, it shouldn’t make any difference to his fans or teammates if he’s gay or straight, or whether or not he’s had sex on camera (it’s also worth noting that he’s pretty easy on the eyes, so if he chose to pursue an adult career, you wouldn’t see me complaining). Judging by the amount of abuse he’s received on Twitter, it seems that’s sadly not the case.

On the plus side, however, it seems that many of McCarron’s fans and teammates have come out in staunch support of him. Many in the GAA have tweeted their support of McCarron, and a Facebook page, “Supporting Cathal McCarron,” has garnered more than 5,000 likes.

What Cathal McCarron does is none of our business, what he does in his private life to make a living is his. No shame at all. His choice.

What business is it of anyone else, as to what he may or may not get up to in his own personal time! I say all the power to him! #fergus

Unless Cathal McCarron speaks out about the reasoning behind all this no one should condemn or even sympathise!Its his life- leave him alone

Cathal McCarron needs our support. Kid is in a bad place. Hard to know how it got so bad. Time for Gaels to rally round.

That Cathal McCarron fella seriously needs a break, no-one deserves their personal life being put out all over the news and papers

London GAA vice-chairman Tony O’Halloran also voiced his support for McCarron, telling the Belfast Telegraph the club was “just hoping he’ll get any help that he needs” with his gambling addiction.

While it’s certainly telling that the GAA’s statement in support of McCarron focused on his struggles with gambling, not on his decision to do gay pornography (we don’t know what prompted his decision to shoot the scenes, whether it was money problems or sheer sexual curiosity), either way McCarron is getting the help he needs: He checked into rehab yesterday.