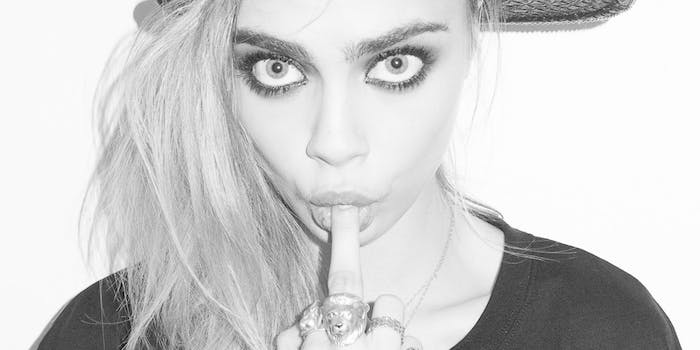 Cara Delevingne slams queerphobic Vogue article, saying her sexuality is ‘not a phase’

The up-and-coming actress is out and proud. Take that, Vogue.

Don’t try to tell Cara Delevingne that being in love with a woman is a phase.

Vogue magazine’s July cover story about the British “It” girl royally pissed off the LGBT community. The interview with Delevingne referred to the young model–actresses’ string of romantic relationships with women as a “phase” that her parents thought she might grow out of and suggested that her attraction to women was the result of childhood mommy issues.

“When I suggest to Cara that to trust a man, she might have to revise an old and stubborn idea of hers—that women are perennially troubled and therefore only women will accept her,” wrote Vogue reporter Rob Haskell, “her smile says she concedes the point.”

The interview, which was widely panned as queerphobic and mansplain-y, generated numerous response articles and a petition garnering more than 21,000 signatures titled “Tell Vogue Magazine: Being LGBT Isn’t a ‘Phase’!”

In an interview with the New York Times on Thursday, Delevingne finally responded to both the controversy and the people who questioned her queerness.

“My sexuality is not a phase,” said Delevingne. “I am who I am.”

The actress hasn’t labeled herself as bisexual, lesbian, or queer—in fact, her famous tagline, as seen on Instagram, is “Stop labeling, start living.”

But Delevingne said she did want the world to know that her current relationship with musician Annie Clark, aka St. Vincent, was the real deal. She is in love.

“Being in love helps, you know?” Delevingne told the Times. “If you’re in love with someone, you can be with them like no one else is in the room. Acting is like that. It’s like taking that feeling and turning it on so nothing else matters when you’re looking in another actor’s face.”

Delevingne’s sexual orientation became a media spectacle last year when was dating actress Michelle Rodriguez. The couple was first photographed drunkenly cuddling at a basketball game, and the paparazzi frenzy culminated in a super-creepy voyeuristic video of the pair making out topless in the crashing waves of a Mexican beach.

Delevingne’s ex had nothing but supportive words for the way she has opened up to the press about being queer and in love. Rodriguez, who came out publicly as bisexual in 2013, told E! that too many LGBT people in Hollywood remained closeted out of fear.

“For her to come out, God bless, I think that’s beautiful,” Rodriguez said. “I have tons of friends who are in the closet, and you know what? Respect. Because you can’t control how people are. You’ve got haters out there. There are too many variables to really judge somebody on their sexual preference. It’s just ignorant.”

Delevingne is known or never being afraid to be herself. She may be called weird, but in fact, being weird is sort of her brand. And her insistence on being out as LGBT hasn’t seemed to hurt her career at all. That in itself stands as inspiration for the countless public figures who remain in the closet.

Delevingne’s modeling career continues to skyrocket her into the top ad contracts with fashion houses like Chanel and DKNY, and her acting career is following an unprecedented path of success for a supermodel, with starring roles in Paper Towns and Suicide Squad and more blockbusters in the works.

Delevingne’s success suggests that society is increasingly accepting of queer celebrities and that the closet is no longer necessary. Few people these days care who wants to bed down with whom—except for us fellow queers, who don’t just care but positively love it.