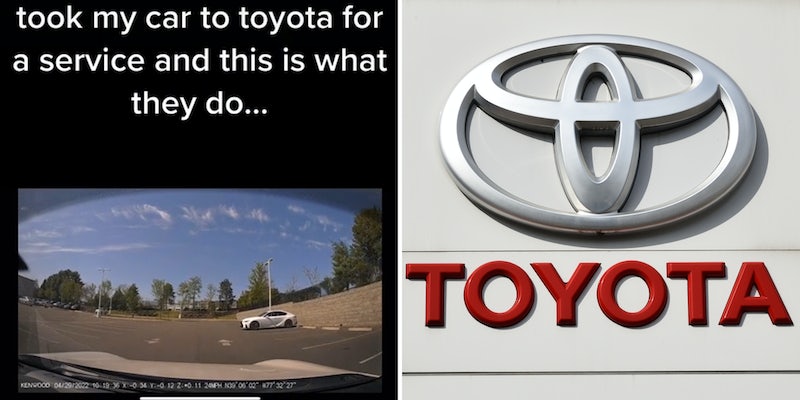 ‘Thank God for that dash cam’: AutoNation Toyota worker caught messing up car while servicing it

'I feel so bad for this car right now.'

A viral TikTok video of dashcam footage shows an AutoNation Toyota worker allegedly messing up his manual transmission GR86 sports car when getting it serviced.

TikTok user @86moe posted the clip of the incident allegedly at an AutoNation Toyota location in Leesburg, Virginia on Friday. “Took my car to Toyota for a service and this is what they do…pls watch the whole vid,” the text overlay reads. “Floors it 30mph in the back lot.”

The clip shows the car being driven through the back lot, and the car can be heard accelerating. According to Popular Mechanics, flooring a car unnecessarily can put stress on the car’s brake pads and rotors.

The rest of the dashcam footage shows the car in the garage and the worker “frying the clutch cuz he doesn’t (know manual),” according to the text overlay. “Frying the clutch” refers to a driver’s foot half-engaging the clutch and heating everything up, which causes wear on the clutch.

The worker then allegedly “dumps [the] clutch,” which is when a driver suddenly releases the clutch pedal, causing the car engine to stall. The abrupt change in speed and direction can damage the clutch itself but also the engine and drivetrain.

In the comments, the TikToker claimed that Toyota is “begging” him to take down the video. He said he’s trying to use the video as leverage to get the clutch replaced. Later in the comments, he wrote that “they didn’t give me much so gonna have to go through corporate.”

As of publishing, the TikTok has over 3 million views. Many commenters sided with the TikToker.

“Man F that. I really hope you said something about it,” one user said.

“Thank God for that dash cam (you) got,” another viewer wrote.

“Pain so much pain,” a third user commented.

The Daily Dot has reached out to @86moe via Instagram direct message for comment and AutoNation via email.