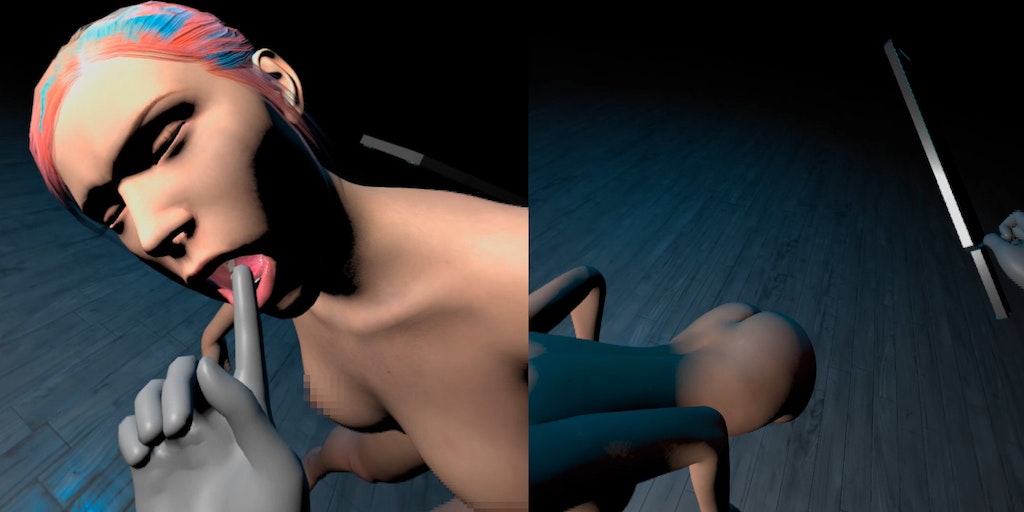 While official Unreal Engine hand-tracking support makes its implementation far easier than coding the feature from scratch, there are still issues that designers have to work with. AntiZero told the Daily Dot that since Captain Hardcore is a physics-intensive VR sex simulator, he had to fine-tune the game for realistic hand-tracking physics and collisions. Then there are hand-tracking user experience concerns; without the Oculus Touch’s convenient buttons and thumbsticks, creating a seamless user experience isn’t easy.

“How does the player move without thumbsticks? How do they select objects or click on menus? You can use natural gestures like pinching, pointing and grabbing—but these are easy to trigger unintentionally and it’s frustrating when you try to grab hold of something and end up triggering something else!” AntiZero said. “There’s also less tactile feedback for the player, they can no longer feel the click of a button or the vibration of a controller, so it’s not easy to make it work in a way that feels natural.”

This reporter recorded a video of the new Quest build, provided to the Daily Dot by AntiZero. Hand-tracking support still has room for improvement but was overall impressive to use. Models responded to gentle touches and strokes, and it was relatively easy to grab characters’ breasts or stroke their bodies. More complicated movements, like inserting dildos or grabbing paddles, were less user friendly. But in terms of supporting “direct” contact between characters and players, Captain Hardcore’s hand-tracking capabilities are already pretty revolutionary. Players can slap characters on the butt and receive a plump “smack” sound as long as their hand is going fast enough (but not too fast, which can throw off the Quest’s sensors).

To be clear, Captain Hardcore’s hand-tracking limitations aren’t on AntiZero’s shoulders. The Quest has a small tracking area and can’t handle fast hand movement. The Quest also can’t track hands obscured by each other; object permanence basically doesn’t exist in the current state. Without enough hand-tracking data to “guess” the player’s pose, AntiZero said, the Oculus Quest “hides the hands completely, or it might miss gestures like pinching.”

“This is a limitation of the hardware and probably won’t improve until Oculus find a more reliable way to do hand-tracking,” he told the Daily Dot.

It’s tricky predicting where VR technology will go next, let alone how it will impact the adult industry. But researchers are already figuring out new ways to make virtual reality more immersive. MIT’s MoveU uses galvanic vestibular stimulation to cut down on motion sickness and simulate in-game movement. Meanwhile, Northwestern University researchers have created “epidermal VR,” a wireless system designed to simulate digital touch via “a fast, programmable array of miniature vibrating actuators.” This would let friends and family “reach out and virtually touch each other” during video calls, the university claims, with practically no time delay.

For the time being, AntiZero thinks “we’re quite far” from touching and feeling VR objects in consumer-based VR devices. He remains focused on the present; Captain Hardcore, for example, works well on Facebook’s newly released Oculus Quest 2.

But while the future may be distant, AntiZero is still interested in pushing the envelope with his adult VR game and seeing where the industry goes next.