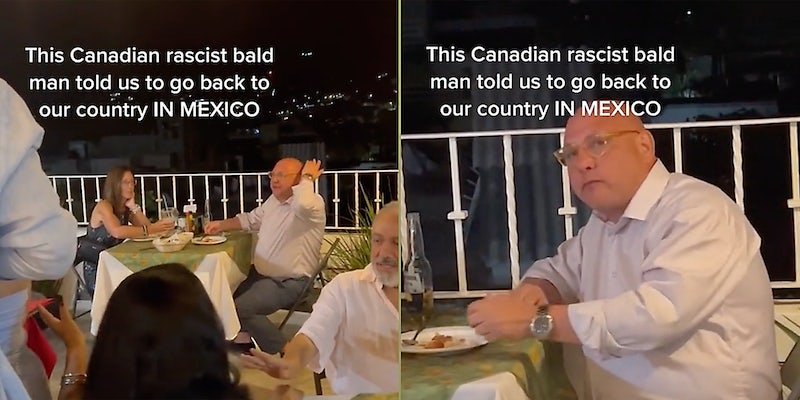 ‘This Canadian racist bald man told us to go back to our country IN MEXICO’: Controversial TikTok of male ‘Karen’ sparks debate

A viral TikTok alleging that a Canadian national, a so-called male “Karen,” was making racist statements to a creator on the platform has garnered 493,800 views in the two days since it was posted.

“To clarify, this is at dinner in Puerto Vallarta,” the poster @deepikaverma91096 wrote. “My friends just got engaged on Christmas and we were celebrating ‘too loud.'”

The video does not show the man making these statements, but it does show the poster’s friends reacting to them as the man in question waves them off.

It was also posted with the caption, “TikTok do what you do best…. Expose him.”

While it does not appear that anyone has “exposed” the man yet, some commenters on the video have taken the opportunity to criticize him.

“They are taking advantage of their Canadian dollar to Mexican peso,” one commenter wrote. “I would do the same except you know. Not be racist.”

Still, some others criticized the video, writing that it only showed one side of events.

“Only one side of the story,” one commenter wrote. “Don’t think much unless both sides are presented.”

Other commenters called out some of their counterparts for defending the man in this manner.

“Nah, we don’t care, nothing justifies racism and the entitlement they feel even outside of their country is so annoying,” one such commenter wrote.

One commenter wrote, in speaking for Canadians as a monolith, “we don’t claim him.”

“Traveling abroad to tell people to go bak to their country isn’t a statement from an intelligent person,” they wrote.

The Daily Dot has reached out to @deepikaverma91096.