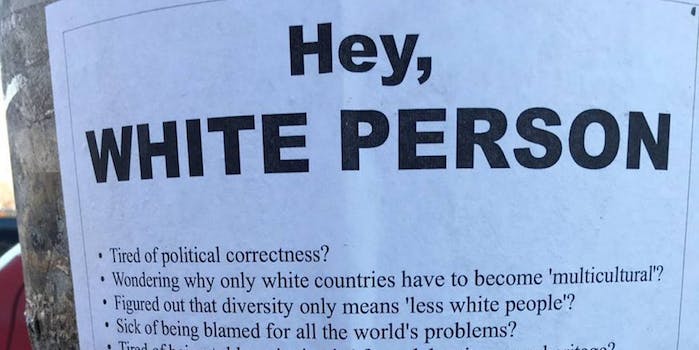 If your solution to election anxiety was to simply move to Canada, you may be SOL. Trumpism has now made it to our neighbors to the north, where people are reporting anti-Jewish graffiti and support for white supremacy.

Facebook user Rabbi Anna Maranta found a swastika with the word “K*ke” spray painted to the door of the Glebe Minyan, a Jewish community in Ottowa she runs.

The Daily Dot reached out to Maranta about the incident, but hasn’t heard back as of this posting. She wrote in a Facebook post, however, that she attributes the graffiti to Trump’s influence. “This is what has been unleashed by the American President Elect, and those that support him,” she said. Later, she responded to another comment with, “The American President Elect has spoken openly. He promotes hatred against many, many groups, including half the human population. His messages have largely gone uncensored. I believe that Pandora’s box has been opened and that we are and will continue to see an uptake in violent actions and speech in the coming days and weeks.”

This hate is unacceptable in our City. Staff are removing the posters immediately and investigating who is responsible.

Marilyn Mayo, a research fellow at the Anti-Defamation League’s Center on Extremism, told the Toronto Star she’s not surprised about the signs. “People feel emboldened right now to promote their white supremacist view. They feel that the movement has been embraced and is getting into the mainstream,” Mayo said. “They were more of a fringe movement, but they’ve received a lot of attention this year because of their support of Donald Trump.”

Many have argued to those worried about a Trump presidency that the president doesn’t have the power to do much, that we have checks and balances to ensure he doesn’t have too much influence. Aside from a Republican majority across the branches of government that would make it easy for Republicans to pass legislation unchecked, the president sets a tone. If an elected official suggests something is acceptable, then legal or not, that thing becomes a bit more acceptable, whether it’s grabbing women, tweeting anti-Jewish sentiments, or supporting white supremacy. And now Trump’s tone is spreading.