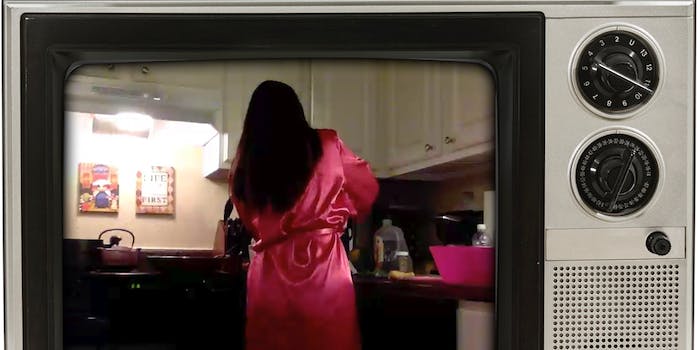 CamSoda is taking the concept of a Peeping Tom to a whole new level.

Here’s how it works: Participating models will leave their cameras on all day, even when they’re sleeping. Users have the ability to tip the models at any time of the day, allowing them to build extra income even when they’re not doing their standard sex shows. In exchange for their privacy, models involved in the program receive $200 a month (plus tips), two free custom 720p webcams, and their internet bill paid for by CamSoda. After a two-month beta period, LifeStream launches for the public today.

“It’s based on my mood, to be honest,” said Charley Hart, a longtime CamSoda model, commenting on what made LifeStream different from her normal day-to-day cam show. “I’m a Gemini, I love to perform, and I love to be out there. But I’m also I’m an introverted extrovert. So some days I want to be up and going, out of my house, and some days I want to just stay in my room all day.”

“I’ve had guys tip me to put things away in the fridge or lay mulch,” Hart admits. “Or doing house chores. Guys love it when I do house chores when I’m cleaning. I have one guy who’s like, ‘You can make anything look sexy,’ and it’s just because I’m doing it in my bra and underwear.”

Often these viewers don’t even want her to acknowledge them or their tips. Some users just want to watch a beautiful woman live her life. It’s a lesson Hart had to learn. “I have one guy that didn’t speak for a long time,” she said. “I’m one of those models that likes my guys to talk to me, so at first I was bugging them until they did. Finally, he was like ‘I just like to watch.’ Sometimes when I break that fourth wall guys get a little turned off.”

That raises an interesting aspect of the LifeStream business model. A standard adult webcam show has a beginning, middle, and end. The fantasy has a stopping point. LifeStream doesn’t have such boundaries. In fact, the release that cam models sign for the program keeps them isolated on the screen, with unapproved guest stars strictly forbidden. You won’t see a model bring home a significant other or a date unless that person has signed a release with CamSoda. That means you probably won’t catch moments of the model hanging out with friends or bringing a date home. Due to broadcast copyright laws, you’ll also never hear your cam model’s favorite song, a rule so essential the production agreement for the models explicitly states no audible music or audiovisual content can be seen or heard through the cam.

In the future, LifeStream plans to introduce a story feature that will allow you to catch up on your favorite model’s life when you can’t sit in front of the screen. Similar to Instagram or Snapchat stories, the performer’s story will feature video sequences from the past 24 hours. The company is also product testing a virtual reality camera that they hope will bring LifeStream into the VR space in the future. For voyeurs, this means no longer looking through the window on their screen but feeling like they’re in the room.

Whether the incentives offered will be enough to draw in new models remains to be seen, but for models who already live their lives in front of the camera, LifeStream presents an interesting opportunity. But in the end, LifeStream is almost hyperreality, a restricted version of what you imagine a cam model’s life is like. Without life’s regular interactions with everyday people, LifeStream is just another form of fantasy.