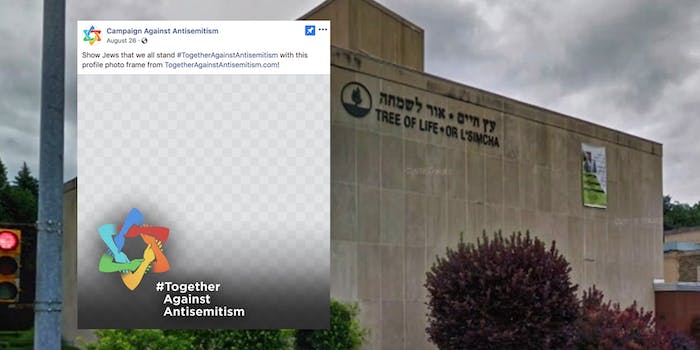 The filter was shared after a mass shooting at a synagogue.

In solidarity with the Jewish community in the wake of a mass shooting, some people have updated their Facebook profile pictures with filters created by the Campaign Against Antisemitism. Some people on social media are now accusing the group of anti-Islam rhetoric.

Posted by Campaign Against Antisemitism on Sunday, August 26, 2018

Campaign Against Antisemitism (CAA) is “a volunteer-led charity dedicated to exposing and countering antisemitism” based in the U.K., according to its website. The organization started a Facebook campaign in response to the attack on Tree of Life Synagogue in Pittsburgh on Saturday. Authorities reported that 46-year-old Robert Bowers shot and killed 11 people and injured four others. According to the New York Times, it is one of the most deadly attacks on the Jewish community in the U.S.

The CAA released a statement on Saturday condemning the Pittsburgh attack and other forms of Anti-semitism. “All over the world, far-right, far-left and Islamist extremists are stoking the flames of Jew-hatred, with too little done to stop them,” the post reads. “Antisemitism is an age-old disease which begins with hatred and violence towards Jews and ends with the unraveling of society.”

CAA reacts to the attack on the Tree of Life Synagogue in Pittsburgh: “All over the world, far-right, far-left and…

Posted by Campaign Against Antisemitism on Saturday, October 27, 2018

Some Facebook users took issue with the language of the statement, claiming that it unnecessarily directed blame toward Islam. “This act was done by a white supremacist, please clarify/update your language. Islam had nothing to do with this,” one user, Stefanie Brendler, commented.

Others online expressed concern over anti-Islam rhetoric resulting from the Pittsburgh attack.

Racism. Anti-semitism. Islamaphobia. Xenophobia. White nationalism. These words belong in the center of our conversation. Yes, gun safety. NO, it's not a matter of the synagogue or church or mosque being better armed. But hate is at the rotten center. We must see it and name it.

Brendler told the Daily Dot that the post failed to mention that the shooter was a white supremacist. “The post from CAA does not identify that the act was done by a white supremacist terrorist at all,” Brendler said. “We cannot make space for Islamophobic rhetoric in a Jewish response to crisis; such rhetoric actually upholds white supremacy.”

Prior to the shooting, Bowers posted anti-Semitic content and conspiracy theories to far-right social media platform Gab. According to the Times, he once wrote that Jews were the “enemy of white people.”

They’ve announced that the Pittsburgh synagogue shooter is a white man. But we already knew that, because they took him in alive.

The Campaign Against Antisemitism did not immediately respond to the Daily Dot’s request for comment.