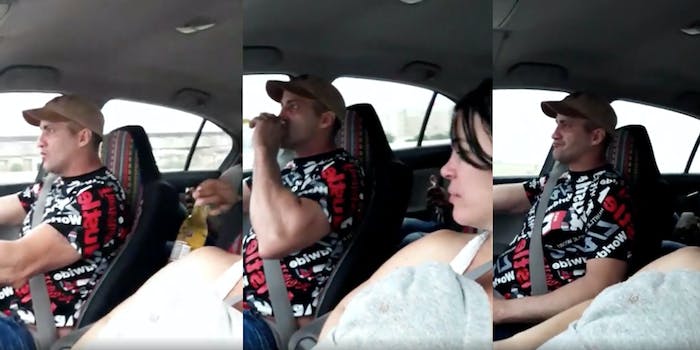 His girlfriend is one of the deceased passengers.

A 47-year-old Houston man was seen on Facebook Live sipping a beer while behind the wheel. Minutes later, he reportedly crashed into another vehicle, and all three of his passengers, including his girlfriend, died.

Camilo Morejon was being recorded by his girlfriend, who was sitting in the passenger seat, for Facebook Live Sunday morning at around 7:47am. “I drive better when I drink,” he says in Spanish, according to the Daily Mail. Some outlets are reporting he said, “I drive better when I’m drunk.”

Moments later, at 7:53am, his silver Honda reportedly crashed into a pickup truck. The video ended before the accident occurred.

The three deceased passengers have been identified as Leosveyka Gonzalez, Massel Rodriguez, and Ricardo Rodriguez-Tamayo, according to Heavy. Morejon, who was allegedly speeding at the time of the accident, and the driver of the pickup truck are both in the hospital in critical condition.

Local investigators are in the process of probing several bars from which Morejon could have possibly bought beer.