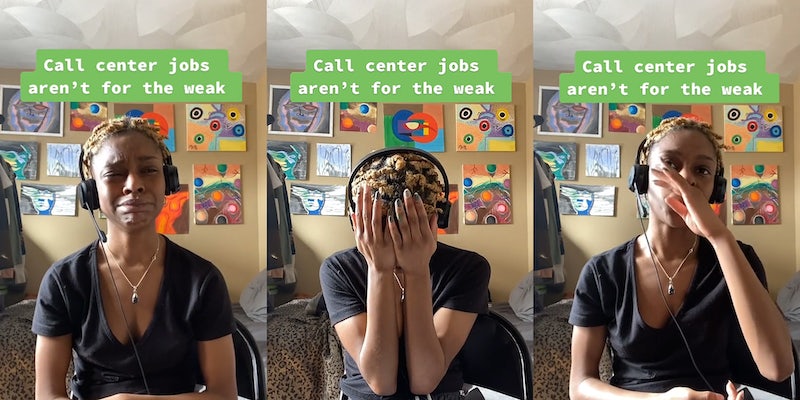 'No job should ever disrupt your piece.'

In a viral video, TikToker Keyarah Elliott (@keyarahelliott) shared a video of themself crying while on a call for their job working at a call center.

“Call center jobs aren’t for the weak,” the overlay text reads on the clip with over 374,000 views.

Honestly, it’s so sad but so funny😭

Elliott struggled to keep their composure while helping a customer on the other side of the phone. While typing in an account number, they continued to cry and sniffle.

“Honestly, it’s so sad but so funny,” they added in the caption.

In the comments section, users asked Elliott if they muted themself on the call and shared their own experiences working for call centers.

“Customer service isn’t for the weak period so we feel you. One thing I’m not going to do though is cry on the call. Call DROPPED!” one user commented.

“Damn you coulda at least MUTED the sniffles,” another user said.

“New job sis.. No job should ever disrupt your peace,” a third user suggested.

In an additional comment, Elliott clarified the backstory of the video.

“I’ll post a story time y’all I don’t work here anymore. I quit like over a year ago I just have no work ethic and cry at every job,” they said.

In the follow-up video, Elliott adds that their job was a remote call center position handling gas and electric bills. They say that woman on the phone was respectful and didn’t say anything about the crying, however, she did have Elliott check 20 different accounts while on one call.

“I wasn’t aware of how many accounts she was going through, so by the tenth one, is like, when I started having a mental breakdown,” they say. “And that’s when I started recording.”

Elliott also notes that working from home wasn’t ideal for them and got to be very overwhelming.

The Daily Dot reached out to Elliott via TikTok comment.