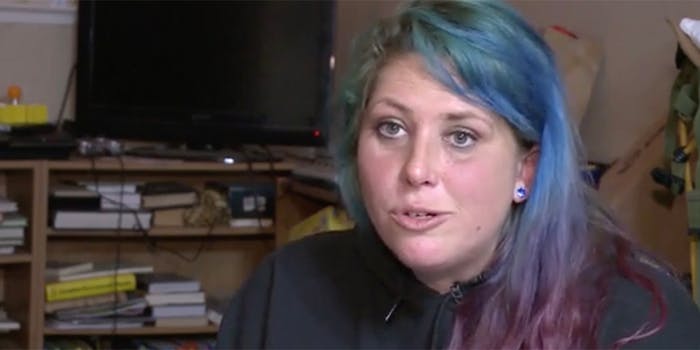 She claims her daughter is the terror's latest victim.

A mother in California says her daughter is the Momo challenge’s latest victim and that it nearly cost her family their lives, CBS News reports.

Momo, the sculpture-turned-WhatsApp-meme, has had parents, politicians, and even Kim Kardashian speaking out against a viral challenge reportedly hidden in YouTube Kids videos. If four years worth of urban myths are anything to go by, the terrifying character instructs viewers to perform increasingly dangerous acts until she finally demands they kill themselves.

According to Pearl Woods, her 12-year-old daughter with autism, Zoey, began exhibiting unusual behavior and mentioning Momo a few weeks ago. “Where is ‘suicide’ coming from? Why would she ask me about a knife into an outlet?” Woods said, per CBS.

Though Woods said she monitors what her daughter watches, reports say Momo is often snuck into the middle of videos, past when parents might have stopped screening it. Woods said last weekend, the situation nearly became explosive when Zoey turned on the gas kitchen stove without lighting it, flooding the place with gas.

After that incident, Woods said she started finding Momo clips spliced into the videos Zoey watched. “It was Momo making bad videos,” Zoey reportedly said. “It was bad.”

It’s unclear what videos Pearl Woods and her daughter saw that included images of Momo. YouTube told the Daily Dot earlier this week that it had found no evidence of the challenge and that such content would be removed for violating its policies. Real or not, authorities are warning parents to pay close attention to what their children watch online.