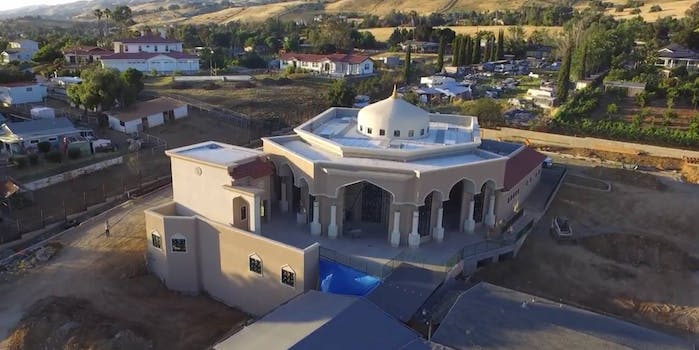 'He’s going to do to you Muslims what Hitler did to the Jews.'

Since the election of Donald Trump earlier this month, there’s been a gush of reported expressions of racial or religious hate iconography being spotted in public, along the lines of spray-painted swastikas and slogans like “MAKE AMERICA WHITE AGAIN.” It’s equally sad, grim, worrisome, and incensing, and it’s a consequence of the inflammatory and divisive campaign the President-elect ran and of some people who’ve felt validated and emboldened by his victory.

And now, according to the Council on Islamic-American Relations (CAIR), a trio of anti-Islam, pro-Trump letters making genocidal threats have been sent out to a trio of California mosques.

The first was reportedly sent to the Evergreen Islamic Center in San Jose, California, where it was discovered by the mosque’s imam and reported to law enforcement on Thanksgiving, with subsequent letters received by mosques in the southern California cities of Pomona and Long Beach. Here’s what the San Jose letter says. Warning: It’s a daunting read.

“To the children of Satan,

You Muslims are a vile and filthy people. Your mothers are whores and your fathers are dogs. You are evil. You worship the devil. But your day of reckoning has arrived.
There’s a new sheriff in town—President Donald Trump. He’s going to cleanse America and make it shine again. And, he’s going to start with you Muslims. He’s going to do to you Muslims what Hitler did to the Jews. You Muslims would be wise to pack your bags and get out of Dodge.
This is a great time for patriotic Americans. Long live President Trump and God bless the USA.

Americans for a Better Way”

Hate letter left at San Jose mosque:
"He's (Trump) going to do to you Muslims what Hitler did to the Jews."https://t.co/mZxO8XwKt5 pic.twitter.com/2wobhyZzvL

The letter is, in clear and simple terms, a threat of genocide and ethnic cleansing, making the point plainly by invoking Hitler and the Holocaust. And while these sorts of incidents have anecdotally seemed to be on the rise since Trump’s election, recently released FBI statistics from 2015 show that anti-Muslim bigotry was indeed surging that year.

And given Trump’s campaign rhetoric—which included calling for war crimes to be committed against Muslim terrorism suspects and their families and for a “total and complete shutdown of Muslims entering the United States”—it would stand to reason that this trend will continue.

Trump himself called on any supporters who’ve been engaged in racial hatred since his victory to “stop it” in an interview with 60 Minutes, but he hasn’t shown much interest in expounding on the problem.

Some of his early staffing choices haven’t cheered people concerned about anti-Muslim bias in the halls of American power. His new chief strategist is former Breitbart CEO Steve Bannon, a man who drenched his website in the culture and ideals of alt-right racism and white nationalism. Meanwhile, Trump’s new national security adviser, retired General Mike Flynn, has openly described Islam as “a political ideology” that “hides behind this idea of being a religion.” He’s also compared Islam to “malignant cancer.”

Given that choice for one of the nation’s top national security roles, it’s not hard to see how a genocidal-minded person might get the idea that it’s open season on local mosques or that it’s time to spray-paint a swastika somewhere where people will see it. Hopefully something meaningful will happen to stem the tide of this kind of virulent bigotry, but as the situation stands now, it seems entirely plausible that things are going to get worse before they get any better.