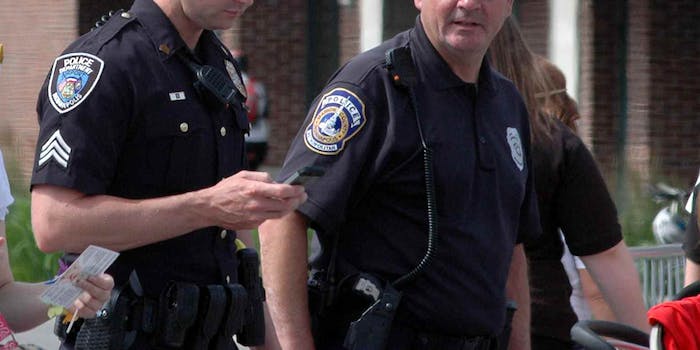 Just how widespread is this practice?

California law enforcement is embroiled in scandal after a California Highway Patrol (CHP) officer arrested for stealing intimate photos from a female suspect’s phone claimed that the practice of sharing nude photos is widespread among law enforcement and is considered a “game.”

Officer Sean Harrington was arrested last week after a DUI suspect “Jane Doe” arrested in August alleged that he had gone through her phone without her permission while she was in custody, sending himself explicit photos that he found on the device. At the time, police refused to comment on whether Harrington was the only officer under investigation. Now a search warrant affidavit indicates that multiple other officers are implicated in the theft and sharing of suspects’ intimate photos.

Two other officers, Robert Hazelwood and Dion Simmons, have been identified as participants in what Harrington called a “game” that he had played “half a dozen times in the last several years.” The San Gabriel Valley Tribune has published what it says are excerpts of text messages sent between Harrington and Hazelwood, discussing the woman’s stolen photos and their intention to compare them to her official mugshots:

Hazelwood: Nudes are always better with the face

Harrington: Maybe she knows she has a jacked up horse face?!?!?

Harrington: When we get back to the office. And we’ll have the MDF mug shot, too

Hazelwood: Her body is rocking though

Hazelwood: Still looks good to me

Earlier exchanges apparently related to a separate theft from a 19-year old DUI suspect show Hazelwood complaining that there’s “no fucking nudes.” Another shows Simmons laughing at the same photos sent to him by Harrington.

Harrington is based in Dublin, Calif., but says he learned the practice in Los Angeles. If his claims are true, the theft of nude photos may be widespread in police forces across California.

Investigators in Los Angeles uncovered a similar incident several years ago, resulting in the firing of one officer and the resignation of another, the Tribune reports.

Police had previously attempted to downplay the revelations and the suggestion that the practice might be widespread; “It’s just one guy’s statement, a spokesperson for the CHP Southern Division said. “Officers who I work with don’t do it.”

CHP Commissioner Joe Farrow has since said that “the allegations anger and disgust him,” and that the CHP “[expects] the highest levels of integrity and moral strength from everyone…and there is no place in our organization for such behavior.”

The Contra Costa Times reports “shock, fear and disappointment” from the local community. Community activist Christopher Covington said “the trust factor is completely blown out of the window, and it’s a detriment to all other honest officers.”

“When I learnt about this I was stunned and I didn’t feel safe any more,” youth activist Kazmere Duffey told the Tribune. “If I’m calling over a rape or domestic violence, I feel they will not be there to protect me. The police are here to protect and serve, and they are not serving anyone by spreading naked pictures. They’re creating havoc.”

Harrington was placed on desk duties when the allegations first surfaced. His and other implicated officers’ involvement in the alleged “game” could threaten to derail court cases in which they are witnesses.

Following a ruling of the U.S. Supreme Court, it is illegal for police to search a suspect’s phone without a warrant. Police in these cases neither sought nor obtained one.