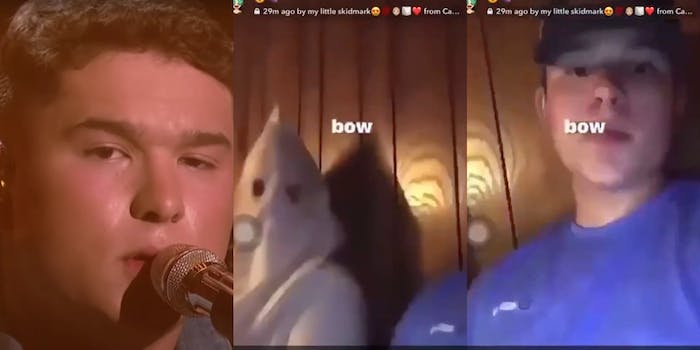 'Caleb doesn't have a racist bone in his body.'

American Idol finalist Caleb Kennedy has left the competition after a video that re-emerged on social media showed Kennedy filming and sitting with a friend wearing a Ku Klux Klan hood.

“American Idol contestant Caleb Kennedy will no longer be moving forward in the competition. Sunday’s episode will feature the Top 4 with one contestant elimination,” the show verified.

The video is brief, but it appears that Kennedy is having a good time the person in KKK garb. Per Daily Mail U.K., Kennedy was 12 years old when he shot and uploaded the video to Snapchat in Spartanburg, South Carolina.

Kennedy, now 16, apologized for the video on Instagram. “There was a video that surfaced on the internet, and it displayed actions that were not meant to be taken in that way,” Kennedy said. “I was younger and did not think about the actions, but that’s not an excuse. I wanna say sorry to all my fans and everyone who I have let down.”

“I’ll be taking a little time off social media to better myself, but saying that, I know this has hurt and disappointed a lot of people and made people lose respect for me,” Kennedy continued. “I’m so sorry! I pray that I can one day regain your trust in who I am and have your respect! Thank you for supporting me.”

According to the Spartanburg Herald-Journal, Kennedy’s mother Anita Guy claims people have the wrong impression about her son and the video.

“I hate this has happened and how Caleb is being portrayed by people online,” she told the paper. “This video was taken after Caleb had watched the movie The Strangers: Prey at Night and they were imitating those characters. It had nothing to do with the Ku Klux Klan, but I know that’s how it looks. Caleb doesn’t have a racist bone in his body. He loves everyone and has friends of all races.”