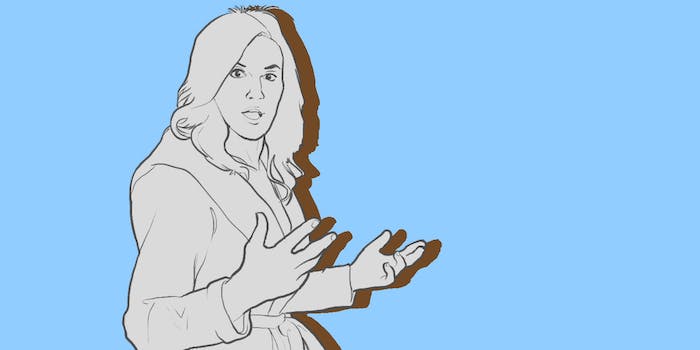 Of course she's a Halloween costume.

Pop culture has that kind of staying power.

Now the Jenner juggernaut has entered its logical next phase: a Caitlyn Jenner Halloween costume.

But because Jenner is a trans woman, a lot of people are not comfortable with the idea of douchey guys all over America donning an “I am Cait” sash and silky bustier. Social media is abuzz, both with offended and concerned statements and shrugging comments from folks who don’t think the costume is a big deal.

If I ever see someone wearing a Caitlyn Jenner costume. Expect me to remove you from my life in every shape and form. That's a promise.

There are also multiple petitions that aim to get the Caitlyn Jenner costume pulled off shelves. A Change.org petition created Aug. 23 has nearly 2,000 signatures calling the costume “insensitive and deplorable” and asking Spirit Halloween‘s PR head Trisha Lombardo to reconsider the Jenner item.

“To make a costume out of a marginalized identity reduces that person and community to a stereotype for privileged people to abuse,” reads the petition. “In this case, if you follow through with production of a Caitlyn Jenner costume, cisgender people will purchase it to make fun of her and our community.”

Another petition on All Out created today echoes the idea that people who purchase the Jenner costume will do so in order to mock transgender people.

“Spirit Halloween will be telling thousands of party-goers that trans people are a joke,” reads the All Out petition. “Caitlyn’s high profile transition gave millions of people a more sensitive understanding of what it means to be trans. But prejudice and violence against transgender people are still rampant. And by selling a Caitlyn costume, Spirit Halloween will be cashing in on this bigotry.”

The LGBT community has hit peak mainstream. Like it or not, 2015 has been the year that transgender visibility and LGBT human rights—from marriage to anti-discrimination law to healthcare equality—have taken over the cover of every newspaper and magazine, have dominated the courts and the halls of governance, and have mainstreamed our lifestyles to the point of becoming fodder for suburban strip mall Halloween pop-up shops.

Regardless of whether a Caitlyn Jenner costume is offensive or just one more in a constant stream of celebrity Halloween tributes, one thing is for sure: the costume itself is really low-quality. We may not be able to prevent frat boys from dressing up like Jenner this Halloween, but we can at least encourage them to do a better hair and makeup job. And maybe shave. 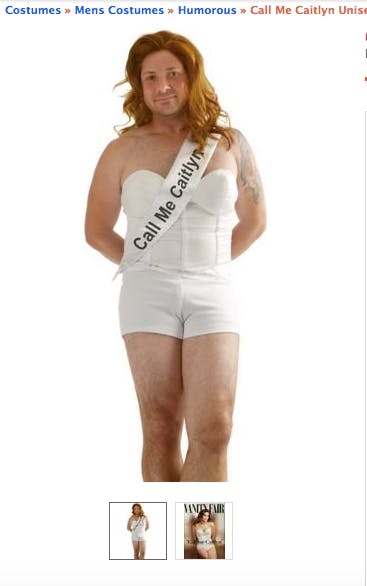