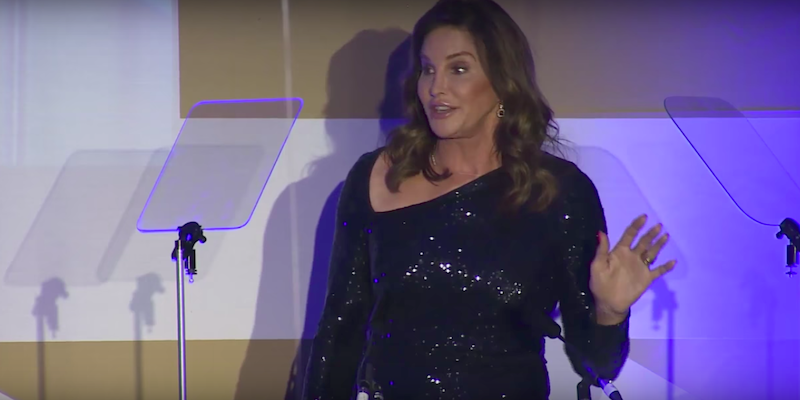 Even if you hate Caitlyn Jenner, she doesn’t deserve to be harassed

This weekend, Caitlyn Jenner was bestowed with the “Loud and Proud” honor at British LGBT Awards for bringing widespread visibility to the trans community. Jenner’s coming out interview with Diane Sawyer in 2015 was a major cultural moment, watched by more than 20 million people.

But as Oprah and Forest Whitaker are well-aware, even famous people can’t escape the reality of discrimination against racial and gender minorities.

As she left the event, photographers shouted obscenities at the 67-year-old, calling her a man. One screamed “Where’s your dong, fella?” and another yelled, “Oi, Bruce, get your dick out.” Reports suggest that Jenner’s hecklers even started throwing things at her. The incident is being investigated as a hate crime.

Instead of coming to the reality star’s defense, the widespread reaction on Twitter has been to mock and dismiss the abuse she experienced, as if harassing someone doesn’t matter when the target is Caitlyn Jenner, who can rile up both sides of the political aisle. Some called her a “cunt” and a “tranny,” while others suggested that she was blowing the incident out of proportion to get attention. (Warning: These tweets are definitely NSFW.)

hearing that some bloke kept shouting "Bruce, get your dick out" to Caitlyn Jenner has made my week #KingHeckler

@Caitlyn_Jenner oi Bruce get ur dick out

While disturbing and vicious, these kinds of attacks are not necessarily surprising. Twitter is, after all, the birthplace of Gamergate. But many members of Jenner’s own community offered little support, piling on the hate.

Let’s take these comments on an article from LGBTQ Nation, a website that covers queer and trans news: 1) “the bitch deserved every insult”; 2) “Jenner should reap what she has sown”; 3) “it’s hard to be sympathetic to someone who’s a hypocrite and an opportunist”; 4) “I think Caitlyn is just exaggerating”; and 5) “suck it up you only make your kind look weak and pathetic [sic].”

It’s not a secret that Jenner isn’t exactly the most popular person in the LGBTQ community. The out Republican was a supporter of Sen. Ted Cruz’s presidential campaign, despite the fact the Tea Party favorite is one of the leading proponents of laws forcing trans people to use public bathrooms that do not correspond with their gender identity. When Cruz dropped out, Jenner switched to Donald Trump, who she claimed would be “good for women’s issues.” She would go on to vote for him in the election.

As one of the leading critics of Jenner’s support for the Republican Party, I believe that people have every right to lampoon her funhouse-mirror worldview. She voted for a man who has spent the first months of his presidency quietly rolling back LGBTQ rights, whether it’s protections for transgender students, federal oversight of workplace discrimination, or laws that ensure trans people can get affirming healthcare. While Jenner has come out against those decisions, it’s too little, too late. She helped create his monster, and should be held accountable for that.

But there’s a big difference between criticizing someone’s political ideology and saying they deserve to be subjected to violence because of it. Blaming her for the incident is an affront to the countless transgender people who experience vitriol and violence every day just for existing.

2016 set a new record for the number of trans people killed in the United States, and at least 10 transgender people have been murdered so far this year because their assailants believed that their trans status meant they didn’t deserve to live. Four victims—all of them black women—were killed in a single week. A man in Mississippi was sentenced to 49 years in prison on Monday because he would rather murder his girlfriend than tell his friends he was dating a trans woman.

When these women die, critics often suggest it was their fault. Maybe the victim was a sex worker. Maybe their partner didn’t know they were transgender. Neither of these things should be a death sentence.

Joseph Scott Pemberton, the 19-year-old Marine who killed sex worker Jennifer Laude in a Manila hotel room in 2014, claimed in court that he freaked out when he discovered Laude was transgender. Pemberton “feared he would be raped,” his lawyers argued. Laude, who was just 26 at the time of her death, was strangled and dragged into the bathroom, where Pemberton would drown her in the toilet bowl, forcing her head under the water.

This is often known as the “trans panic” defense, a nebulous idea that learning someone’s gender identity induces a kind of temporary insanity. This legal argument is outlawed in California.

There’s always some reason, though, to suggest that trans people deserve whatever is coming to them, the proverbial “short skirt” that says they were asking for it. You might disagree with everything that Jenner stands for, but saying she deserves to be at the receiving end of a transphobic attack only affirms the idea that there are justified reasons for harassing or even murdering someone. It sends an implicit message that there would be circumstances where it would be OK for someone like Pemberton to do what he did—and that we would feel less sympathy for the victim.

If we care all about this brutal, horrific reality, the LGBTQ community must take a stand against every instance of transphobic abuse, not just when the victim is someone we like.