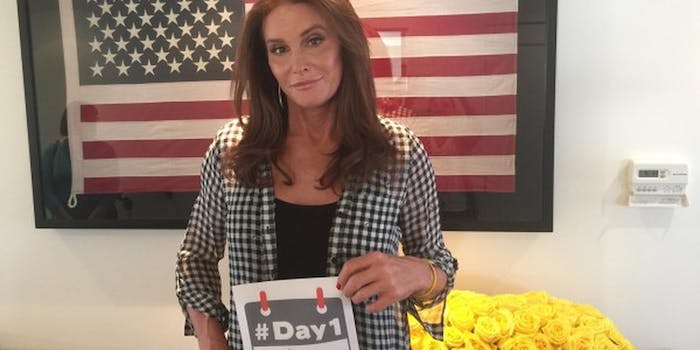 Caitlyn Jenner throws her support behind the #Day1 anti-bullying campaign

She poses with a #Day1 poster in new blog post.

Caitlyn Jenner is taking a stand against bullying with the Tyler Clementi Foundation and the #Day1 campaign.

In a post from the foundation on Facebook, Jenner is seen holding a poster with the #Day1 hashtag on it. The post reads: “You are creating a better world for our youth and we are thrilled to have your support.”

Jenner posted the same photo of herself on her own blog and answered questions from readers. She wrote, “it’s been both eye opening and difficult to see firsthand what so many members of the trans community have had to go through just to be themselves. I hope to help raise awareness of these hardships so that it becomes a less painful process going forward.” Though she didn’t specifically call out the campaign on her blog, she did list the Tyler Clementi Foundation as a resource.

.@Caitlyn_Jenner You are a hero! Thank you for joining @TylerClementi's #Day1 campaign. Together, we can stop #bullying before it starts.

The campaign seeks to end bullying and harassment by encouraging schools, workplaces, and sports programs to address these issues from the start, and to make it clear “some forms of ‘socially acceptable’ teasing or cruelty are unacceptable.”

The Tyler Clementi Foundation is named for a student at Rutgers who committed suicide in 2010 after he discovered his roommate spied on a sexual encounter he had through a webcam, and had attempted to set up a viewing of a second encounter.

The hashtag hasn’t quite caught on yet. Right now, it’s mostly people tweeting about the first day of their workout routines, but Jenner’s endorsement may change that soon.