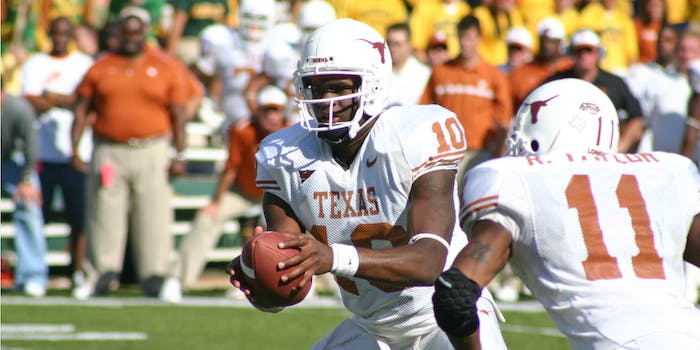 Students have called to ban the song at football games.

A former University of Texas at Austin football player says he and his teammates were “threatened” by university alumni over the school’s spirit song, which has a racist history.

Caden Sterns, a former safety, tweeted on Monday that he and teammates were subject to threats from school alumni who suggested they “would have to find jobs outside of Texas if we didn’t participate” in the fight song.

The tweet was a response to emails obtained and published on Monday by the Texas Tribune showing emails from wealthy and notable alumni who threatened to pull donations if the university president didn’t take a stronger stance supporting the school spirit song, “The Eyes of Texas.”

Sterns did not immediately respond to the Daily Dot’s request for comment.

The song, a long-standing tradition at the university, has origins dating back to the 1860s and Confederate Army Commander Robert E. Lee, the university president at Washington College in Virginia at the time, Texas Monthly reported.

Lee was known for telling students that “the eyes of the South are upon you” as a reminder to uphold Southern traditions and work ethic. A student at that university later attended and became president at the University of Texas at Austin, bringing the song with him.

Despite recent efforts from current students to stop playing “The Eyes of Texas” at football games, hundreds of alumni flooded the email of university President Jay Hartzell demanding a stronger stance against “cancel culture,” the Tribune reported.

“It’s time for you to put the foot down and make it perfectly clear that the heritage of Texas will not be lost,” wrote one donor who graduated in 1986, per the Tribune. “It is sad that it is offending the blacks. As I said before the blacks are free and it’s time for them to move on to another state where everything is in their favor.”

In similar emails, alumni threatened to cancel season passes and financial support, the Tribune reported, should the university not take a stronger stance against students who “were disrespecting university tradition by protesting [the song].”

Another unnamed donor wrote to Hartzell in October and said he could rescind his “endowment in excess of $1 million to athletics.”

Hartzell announced in July that the song will still be played at games and that the university will “acknowledge and teach about all aspects of the origins” of the song.