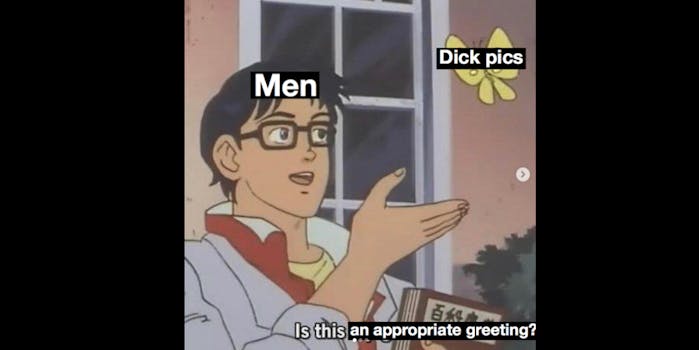 Now that the country’s collective ire has settled somewhat in the wake of Judge Brett Kavanaugh‘s confirmation to the Supreme Court, here’s something to get your blood boiling again. Instagram account @byefelipe, created by Alexandra Tweten, memorializes the minefield that women on the internet have to sludge through when trying to find a date, have a conversation or even find a good mechanic. Tweten collected so many horror stories, she made them into a book, also titled Bye Felipe.

The Tinder era, in particular, has allowed insecure men on the internet to abuse women in hopes of slapping a band-aid on their fractured male egos. In 2014, Tweten came up with the idea for the account, after talking with some friends about the unfortunately common hate women accept as part and parcel of online dating.

“It’s always been about making fun of toxic masculinity,” she told the Daily Dot via email.

Tweten gathered examples of these interactions from her friends, and “Bye Felipe” was born. Other women came forward with plentiful examples of similar behavior, and the account quickly gained popularity. Women took photos of conversations they had with men, shared stories, and found a community ready and willing to listen, support and understand what it was like to get these reactions online.

“I get about 20 emails/day with screenshots of terrible messages men send to women. I also learned that just when I thought I’d seen the worst example, another one always comes along to top it,” Tweten wrote. She went on to compile many of these stories into her book, which was published on Aug. 21, 2018.

In an interaction posted on “Bye Felipe,” when one woman called out an admitted cheater for his lack of commitment, things quickly went downhill.

“So you are going behind her back, cheating on her, and betraying her,” the woman said, after the man she was speaking with told her he had a girlfriend who was not okay with him being with other people.

“You sure used the harsh words,” he responded.

“I’m using accurate words,” she shot back. After telling him how painful it is to be on the other side of cheating, his eloquent response was “Lol…fuck you cunt. I hope you get herpes.”

It is fascinating how quickly these conversations turn sour. All it takes is a woman hesitating to respond for a man to go off the rails. Another post shows a man completely losing his cool after… well… nothing. The target of his affection didn’t respond, so obviously she is a huge “bich.”

In some cases, the women had fun with it. In one interaction, an insistent man hoping for nudes was greeted by very realistic interpretations of his requests.

Most follow the same pattern women have become depressingly used to by now. A man reaches out with the expectation of a particular response, and when it doesn’t happen as he hoped, he turns hostile. Name calling, slut-shaming, and fat jokes abound.

There is nothing about the frequency with which these interactions occur that is OK. The internet creates a type of echo chamber, where people feel like shouting the loudest makes their words the most legitimate. This toxicity spreads like wildfire, and it teaches young people on the web that this behavior is not just acceptable, but normal.

Tweten said that moving forward, one very important approach to combatting this kind of behavior is user safety on social media and dating sites. She said women often tell her about men following them from platform to platform after they have been blocked.

“We’re never going to stop online harassment until we change our culture. It’s very widespread, and I get submissions from all over the world,” she said. “But I think having conversations about it is important. Men holding other men accountable is a huge help.”