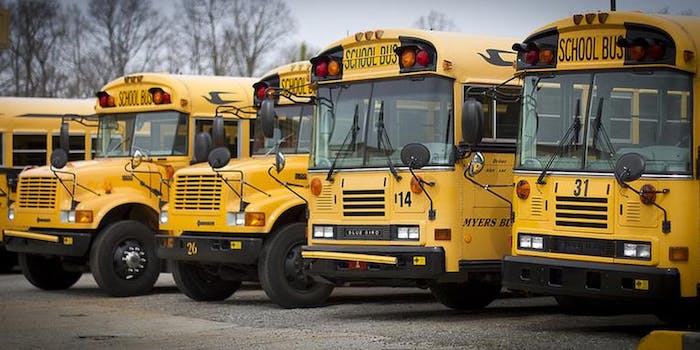 The kid claimed the driver kicked him off the bus for no reason. But surveillance footage tells a different story.

In light of a previously unreleased video, an Edmonton, Canada school board now acknowledges it was wrong to call for the firing of a school bus driver after an earlier video showed him kicking a student off the bus 10 blocks before his stop.

The second video, released by the bus company, shows the student standing up behind the driver, swinging his hockey bag (this is Canada, after all), and smacking the driver across the head with it. Perhaps unsurprisingly, this led the driver to stop the bus and send the youth on his way.

There is no audio accompanying the dashboard video and it’s unclear exactly what caused the student to assault the driver. However, the full recording does appear to show verbal interactions between the driver and students in the first few rows of the bus before the incident.

The earlier video was released by local news outlets, initiating the campaign to have the driver fired. The bus company refused to terminate the driver and later released the second clip, which has gone viral on Reddit.

“In light of the second video showing an assault on the driver, we realize we should not have requested the driver’s termination and have apologized to his employer, Cunningham Transportation Service, and will be apologizing to the driver as soon as we can reach him,” Edmonton Catholic School Board spokeswoman Lori Nagy said in statement on Tuesday.

According to Lauara Doroshenko, operations manager for Cunningham Transportation Service, the bus driver had only installed his dashboard camera earlier that afternoon. His colleagues might want to follow his lead.