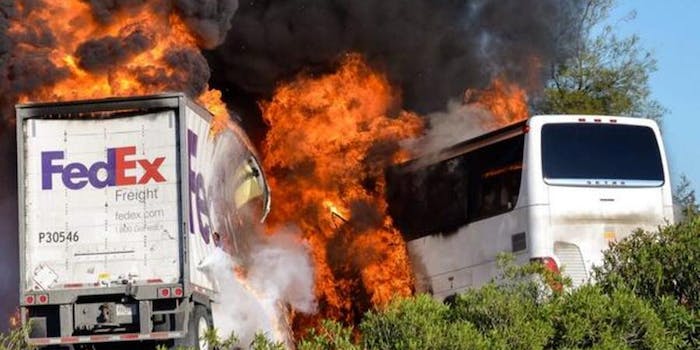 Whatever your thoughts on the selfie phenomenon, it’s hard to not think this is pretty unbelievable: Jonathan Gutierrez, a 17-year-old who was involved in a bus accident that killed 10 people in northern California yesterday, wanted to prove to his family and friends that he was OK after the crash. So he tweeted a selfie taken at the hospital, where he’s currently being treated for injuries sustained during the crash.

.@ActionNews_Now: 1 student takes a selfie at the hospital after being involved in the #OrlandCA bus crash. He’s OK pic.twitter.com/iF1zvPOvmr

WOW an idea of how intense the cras was MT“@KRCRScarborough: Photo from viewer Jeremy Lockett of bus crash. @KRCR7 pic.twitter.com/CqyXQYq0NU”

34 of the passengers were taken to local hospitals, including Gutierrez, who tweeted during the accident and immediately afterwards:

cant believe this just happened.. i was asleep and next thing you know i was jumping out for my life pic.twitter.com/rYIuoyibG3

bruised leg, eyebrow cut open, scratches all over my arm, & all my stuff that i packed is burned. I’m beyond thankful that i’m still here.

so crazy man… i cant believe this

Taking a selfie after experiencing a harrowing incident seems to be something of a trend as of late. Earlier this week, Nate Scimio tweeted a selfie from the hospital after being attacked at his Pennsylvania high school, and social media guru Shashi Bellamkonda live-tweeted his plane’s emergency landing while on a flight to Boston, posting a photo of himself wearing an oxygen mask.

While many would probably squirm at the notion of people immediately turning to social media after a near-death experience, if nothing else the post-trauma selfie is intended to be a life-affirming statement. It’s like staring down your own mortality and triumphantly giving it the finger. We’re glad Gutierrez is OK, and considering what he just went through, it’s pretty incredible he had the wherewithal to post selfie afterward.