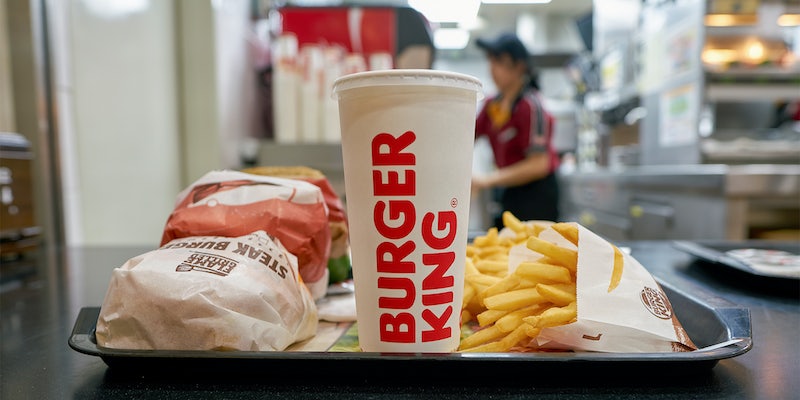 ‘Are you happy now?’: Customer films Burger King worker quitting after she asks for money back, sparking debate

'Sad that customers can be so cruel.'

This story contains descriptions of suicide.

A viral video showing a Burger King employee quitting after a customer requested a refund has viewers largely siding with the employee.

“Are you happy?” the employee says in the video. “Are you happy now? You see how upset I am. Come in here, being nasty to me. Oh my god, here take $7. You know what, I don’t care. Take it all. Take it the fuck all.”

She slaps money down on the counter in front of the customer.

She informs the customer that what kind of language she uses doesn’t matter since she is quitting. “I quit, lady!” she announces.

She then tells another employee to call someone and says she is going to walk out into traffic to die by suicide. She walks out of the store and starts taking off her uniform.

The poster, @kingmade_nuke26, wrote in their caption that the customer asked for a refund on two chicken sandwiches because they were “fried twice.”

@kingmade_nuke26 is a frequent reposter of viral videos, meaning they likely did not take this video themselves, even though their caption and text overlay makes it seem like they did. It is unclear where the video originated. The Daily Dot has reached out @kingmade_nuke26 via Instagram direct message regarding the video.

“I just want everybody to know about the Burger King on Blanding Boulevard in Orange Park took two chicken sandwiches back because they were fried twice and this is the way the manager acted,” the caption on the TikTok, viewed nearly 1 million times, reads.

Burger King did not respond to the Daily Dot’s request for comment by publication time.

The majority of viewers were empathetic toward the Burger King employee, who some surmised was experiencing a particularly difficult day.

“I work in customer service and I understand, people are so mean,” one commenter wrote.

“Sad that customers can be so cruel,” another commenter wrote.

“Ever since (the) pandemic happened, retail and fast food workers getting verbal abuse more often than ever,” a commenter wrote.

This is true. According to multiple reports regarding customer behavior during the pandemic, there was an uptick in bad customer behavior since the onset of the pandemic. Some psychologists, according to Time, have attributed this to a break in social interactions due to periods of isolation as well as anger, stemming from pandemic-related issues, that is wrongly directed at those in the service industry.

Others who commented on @kingmade_nuke26’s video criticized the filmer for seemingly not having any compassion toward the worker and argued the video backfired on her.

“The only Karen I see is the lady throwing a temper tantrum over some change,” a commenter wrote.