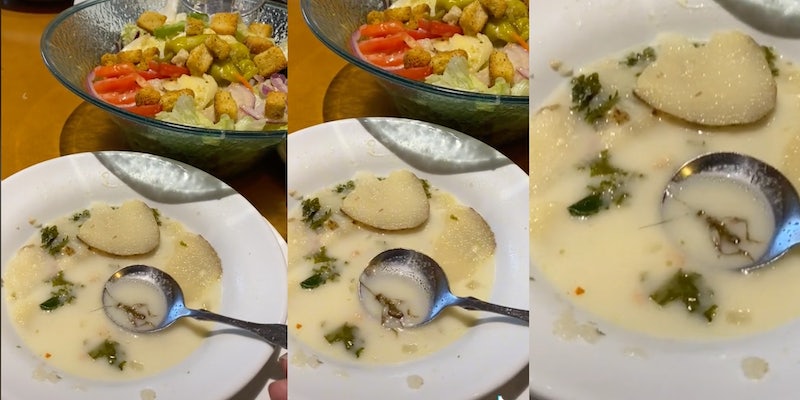 ‘Trust me, there’s worse than that’: TikToker finds bug floating in soup at Olive Garden, and workers chime in

'Worked there 5 years. Least of your concerns.'

A video of a cricket floating in a customer’s soup at Olive Garden has garnered 2.3 million views on TikTok, with some claiming that they have seen worse while working at the restaurant.

The video, posted by user @luis_a_951, shows a large cricket floating on the surface of a bowl of soup from the restaurant, captioned simply, “At Olive Garden.”

“I just quit my job at Olive Garden last week… yeah trust me there’s worse than that,” one commenter wrote in response.

Others who claimed to currently or previously work for the chain shared some of their experiences with alleged mishaps and other things they had seen at the restaurant.

“I used to work there years ago,” one commenter alleged. “Rats used to nibble through the breadstick plastic and they would still bake and serve it.”

Others alleged that on their visits to Olive Garden, they had found other things in their food. “The last time my family went was six years ago when both my mom and I found hair in ours,” a commenter wrote.

The size of the bug left one commenter with the impression that somewhere along the way, a worker saw it and looked the other way before it made it to the customer. “The fact that the person that served it to you obviously saw it floating and didn’t do anything,” they wrote.

The Daily Dot has reached out to the poster of the video through TikTok DM as well as Olive Garden.