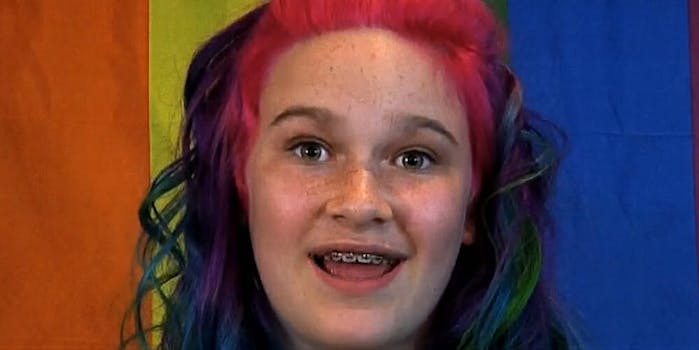 She was inspired after marching in her first Pride.

At the age of 12, Molly Pinta is already becoming a leader in her local LGBTQ community, raising thousands for its inaugural Pride parade.

It started when she attended her gay uncle’s wedding last summer, inspiring her to found the Gay-Straight Alliance at her middle school. A year later, Molly and her mother drove an hour from their hometown of Buffalo Grove, Illinois, to march in Aurora’s first Pride parade. The experience gave Molly the courage to come out as a lesbian to her parents and friends, and also got her thinking about her hometown LGBTQ community. “I imagined having that in my hometown would be so cool and seeing the town supporting the community,” she told NBC News.

It didn’t take long for Molly turn what she imagined into a plan of action. With her parents’ help, she is now organizing the first Pride event for Buffalo Grove. The Pintas reached out to the organization that put together Aurora Pride, Indivisible Aurora, who immediately supported Molly’s idea. The founder and executive director of Indivisible Aurora, Chuck Adams, told NBC News, “Molly has such a self-awareness for her age and we’re just thrilled to be a part of it in any role we can play.”

Indivisible Aurora advised that they start fundraising, so the Pinta family put together a GoFundMe for the event. They also shot a video for friends and family on Facebook, asking for help in fundraising and featuring Molly sitting in front of a rainbow flag. “Growing up in the closet is hard,” says Molly in the video, “but seeing that Buffalo Grove supports the gay community would make someone in the closet feel seen and accepted, which is all someone needs.”

In the two weeks since the fundraiser started, they already have raised over $6,000, and the numbers keep climbing. Town officials have also come out in support of the inaugural Pride event and of Molly. The planning process is moving forward, with the Pinta family setting up meetings with the Buffalo Grove Police Department to figure out a parade route. The first Buffalo Grove Family Pride is tentatively scheduled for July 2, 2019.