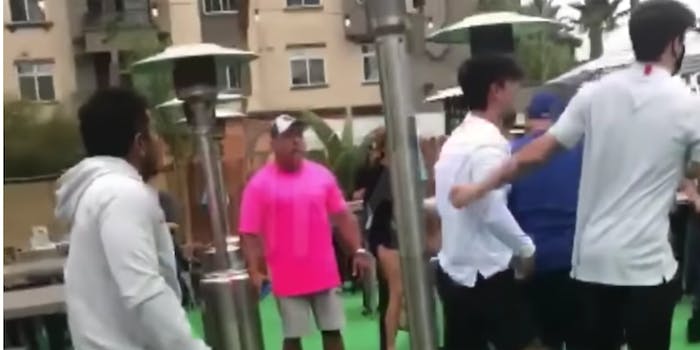 TikTok star Bryce Hall gets into restaurant brawl over vaping

Now he’s being called the ‘TikTok version of a Karen.’

A video emerged late Tuesday night featuring TikTok star Bryce Hall involved in a brawl at a Mexican restaurant in Los Angeles. The brawl, according to Dexerto, broke out after he was asked to stop vaping.

It is illegal to vape at restaurants in Los Angeles. When Hall was asked to stop, he allegedly blew smoke in a staff member’s face.

The situation escalated into a fight when Hall was asked to pay and leave, according to TMZ’s original report on the incident. Hall and his companions allegedly jumped an employee, and the TikTok star is reportedly the one who threw the first punch. Hall has since refuted the allegations, saying a restaurant manager grabbed him and tried to drag him away.

A staff member reportedly suffered a broken hand and is naming Hall as his attacker.

The incident came only weeks after fans and critics slammed Hall after he released footage of himself involved in a street fight.

People were quick to criticize the latest incident as well, with comedian Elijah Daniel even referring to Hall as the “TikTok version of a Karen.”

The overriding sentiment is that Hall is undeniably at fault for attacking a worker who was simply trying to do their job—in the middle of a pandemic at that.