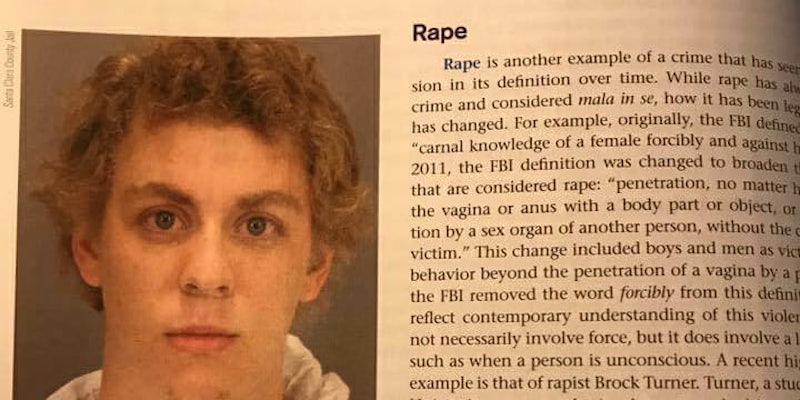 The face of rape culture is now being taught in schools.

Just a year after being released from jail, Brock Turner is already a textbook case of how the criminal justice system fails rape survivors.

In the second edition of a textbook called Introduction to Criminal Justice, written by Callie Marie Rennison and Callie Dodge, a photo of Turner is prominently displayed under the heading “Rape.” Underneath the photo, the caption describes Turner’s sentence:

“Brock Turner, a Stanford student who raped and assaulted an unconscious female college student behind a dumpster at a fraternity party, was recently released from jail after serving only three months. Some are shocked at how short this sentence is. Others who are more familiar with the way sexual violence has been handled in the criminal justice system are shocked that he was found guilty and served any time at all.”

Hannah Shuman, a freshman at Washington State University, discovered the Turner entry in her textbook and posted it to Facebook on Thursday.

“He may have been able to get out of prison time but in my Criminal Justice 101 textbook, Brock Turner is the definition of rape, so he’s got that goin [sic] for him,” Shuman, 18, wrote in the post.

Shuman told the Daily Dot she was “surprised but very happy” to see Turner—who, with his lack of remorse and short sentence, many saw as the poster son of rape culture and white privilege—used as an example of how courts treat rape.

“It’s proof that the large-scale issue of rape is taken as a serious crime,” Shuman said.

She added that her professor didn’t specifically cover the Turner case in class, but that the issue of rape in the criminal justice system has been covered broadly.

“[My professor] has talked about the frighteningly low amounts of rape victims who actually see justice as well as the large amounts of male on woman violence that goes unseen or swept under the rug in America,” she said.

After being released from prison, Turner registered as a sex offender in Ohio. He has two years left of probation.