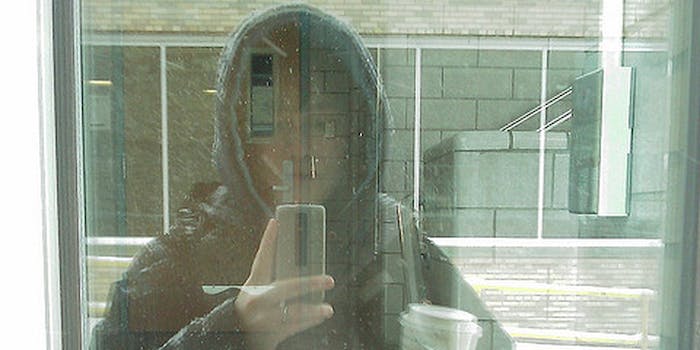 The U.K. has embraced the creepshot

1 in 12 Brits confess to snapping photos of attractive strangers.

Creepshots aren’t the niche hobby you may think: turns out more than 8 percent of smartphone users take them—in the U.K., anyway.

Nokia polled 2,076 Britons and found that one in twelve had “photographed attractive strangers on public transport, in the park, in a coffee shop and even in the doctor’s surgery.” Maybe that’s why a quarter of respondents also refuse to let their partner see the photos on their phones.

But really, in the doctor’s office? We had no idea illness was so becoming.

It’s not just strangers, either. The survey claimed that 7 million people in the U.K. had taken “an intimate picture of themselves,” which we take to mean a partially nude selfie. Meanwhile, 5 million worry that such photos will end up on Facebook or the web in general—you’ve got to wonder what makes the other 2 million so confident in their privacy (or looks).

A host of other findings emerged: 90 percent of respondents delete pictures of their exes after a breakup, and 40 percent admitted to posting photos online simply to brag about their vacation, food, friends, or life in general.

The common thread in Nokia’s report is the value of digital photos as social currency—they are pilfered in secret, closely guarded, assessed for their potential influence or damage, and flaunted at will. The power to snap a picture at any time has brought out the Peeping Tom and master portraitist in all of us, and more often a bizarre mixture of the two.

We can only assume that at some point, the Internet will allow us to access a naked photo of anyone, anywhere, at any time. Maybe that’s what a utopia looks like.