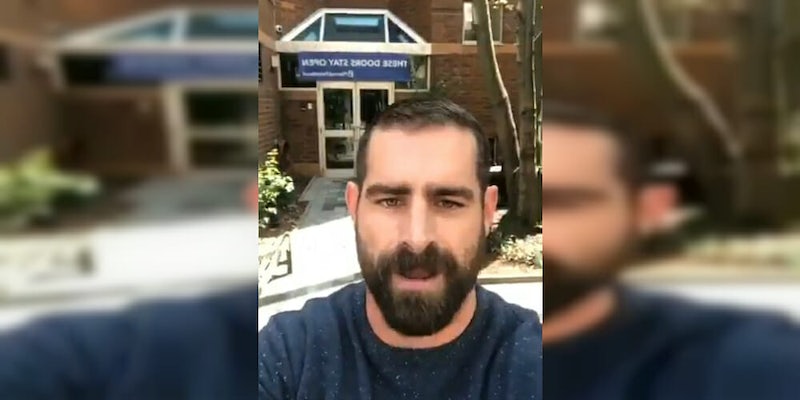 Even some pro-choice people are angry with him.

Pennsylvania Rep. Brian Sims (D) is facing backlash on social media after recently offering a cash reward to people for doxing teenagers who were protesting outside of Planned Parenthood.

Sims recorded multiple confrontations with people praying and protesting outside of a Planned Parenthood clinic near Philadelphia over the last month, once with an older woman, and the other time with a woman and a group of teenagers. In both the videos he tells people to dox the protesters and expose their information to the world.

There has been intense backlash from conservatives, saying he was harassing the people simply for praying and “peacefully advocating for the lives of preborn human beings.” The outrage has snowballed into a planned pro-life rally outside of the Planned Parenthood this week.

Bring it, Bible Bullies! You are bigots, sexists, and misogynists and I see right through your fake morals and your broken values. #BeReal https://t.co/kmDsrQsMmN

In this video, State Rep @BrianSimsPA says he’ll pay his followers $100 if they are able to dox three teen girls he films who are quietly praying outside a Planned Parenthood abortion clinic. How is this guy still allowed to be on Twitter? pic.twitter.com/yfNCHhRSqY

PA Rep. Brian Sims (@BrianSimsPA) has been provoking pro-life protesters outside a Planned Parenthood in his district by filming and questioning them, even pledging to dox one group. Now he's successfully made the Planned Parenthood a site for a pro-life rally on Friday: https://t.co/qjAtOVaEqH

I'm very pro-choice, and watching this sucked. You're literally bullying her. You decided to publicize a corner case scenario where your underlying premise is right but your target and delivery were overwhelmingly wrong.

While there are thousands of instances of anti-abortion protesters at Planned Parenthood clinics being violent and aggressive, nothing Sims recorded in either of these altercations appeared to be aggressive. Regardless of political views, offering a monetary reward for identifying peacefully protesting minors appears to be universally reviled.

Whatever point Sims was trying to make by confronting the protesters was lost in his aggressive attempt to get people online to identify and attack minors. Rather than shaming people away from protesting, Sims illuminated the clinic as a battleground, bringing a wave of new protesters who are unlikely to be as quiet as the ones he confronted before. It’s unknown how many will be coming, but according to conservative writer and self-proclaimed “theocratic fascist” Matt Walsh, “A bunch of different pro-life groups reached out” within minutes of him tweeting that they should organize “a giant pro-life rally at the abortion clinic.”

We’ve reached out to Sims’ office.