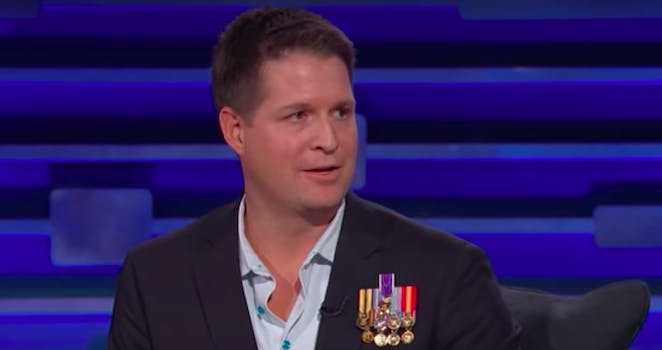 Brian Kolfage, the Iraq War veteran whose GoFundMe campaign to help build a wall between the U.S. and Mexico has gone viral, has a long history of creating and spreading fake news, according to a new report from BuzzFeed.

Kolfage’s campaign is the largest in GoFundMe history at $1 billion requested; he had already raised $15,474,639 as of Saturday. Kolfage is an Air Force vet and Purple Heart recipient who lost both legs and a hand in combat; he cuts a heroic figure, and his message apparently resonates with thousands.

“As a veteran who has given so much, 3 limbs, I feel deeply invested to this nation to ensure future generations have everything we have today. Too many Americans have been murdered by illegal aliens and too many illegals are taking advantage of the United States taxpayers with no means of ever contributing to our society,” he wrote on his GoFundMe.

But Kolfage has also been generating and spreading fake news and conspiracy theories for years, causing some of his social media accounts to be shut down.

One page, WoundedAmericanWarrior.com, features an article claiming President Barack Obama took down the American flag for a “Muslim press conference.” Other articles he shared include claims that Black Lives Matter activists set a white man on fire, and that a Muslim teenager killed a World War II veteran. Kolfage also wrote for Glenn Beck’s website, The Blaze.

In emails obtained by BuzzFeed, Kolfage says he “fell into” the fake news business in 2015, right around the time President Donald Trump’s campaign was starting to gain traction.

Kolfage apparently hired staff to help him write and spread content. “I’m not trained/educated in journalism, I have my degree in architecture design. I kind of just fell into this stuff after getting offered a spot at TheBlaze. Like I said earlier my blog is new and its [sic] growing rapidly,” he wrote to one employee in 2015.

Kolfage also allegedly engaged in social media trolling, which resulted in him filing lawsuits against seven individuals for defamation. Kolfage claimed the defendants threatened his family and engaged in online impersonation. But Ken Vanderzanden, one of the defendants, said that Kolfage doxxed him because he scrutinized Kolfage’s attempt to prove Obama’s birth certificate was fake.

“I was endlessly harassed on Facebook and then started getting death threats to my house and had to change my phone number and go into hiding for a while,” he told BuzzFeed.

Eventually, Kolfage’s Facebook page was shut down, causing him to sue.

Kolfage is also fundraising for an “investigation” into Facebook’s actions in taking down his page. “We are preparing a legal investigation in order to have the DOJ review what Facebook has done. And then we will sue them,”that GoFundMe campaign says.

Kolfage has claimed that he has a connection in the White House that will ensure all money raised goes directly to the wall. GoFundMe has said it will return all donations if the campaign does not reach its goal, but that only applies to donations made through the website. Kolfage has directed check donations to a P.O. box in Colorado. Kolfage and his family live in Florida.

The Daily Dot reached out to Kolfage for comment, but he did not respond by press time.