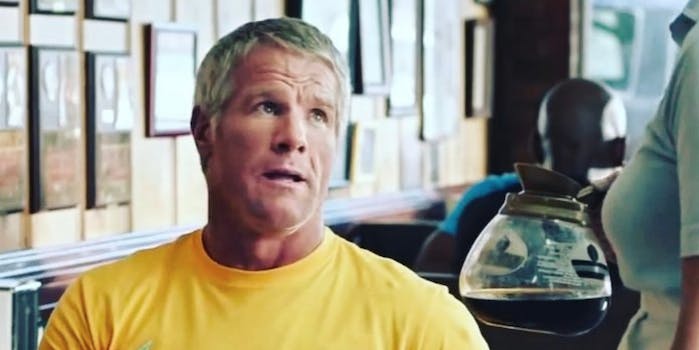 Andy Dick and Soulja Boy apparently got duped, too.

Cameo is an app that allows people to pay for quick video greetings from celebrities and pseudo-celebrities. Mostly used for special occasions, you can get Bethenny Frankel to wish your friend a happy birthday or Caitlyn Jenner to tell your partner happy anniversary. You can even get Brett Favre to make coded anti-Semitic statements and then post them all over the internet.

A pair of white supremacist YouTubers, who refer to themselves as the Goyim Defense League (GDL) have tricked a group of celebrities on the app into recording videos backing the group. They are now bragging about the duped celebrities, according to BuzzFeed.

“Brett Favre here with a shoutout to the Handsome Truth and the GDL boys,” Favre said in the short video. “You guys are patriots in my eyes. So keep waking them up and don’t let the small get you down. Keep fighting too and don’t ever forget the USS Liberty and the men and women who died on that day. God bless and take care.”

The video, which cost $500 to make, was full of dog-whistle anti-Semitic language.

For one, “The small” refers to “small hats,” one slur used for yarmulkes, which many faithful Jewish men wear.

Also, the USS Liberty tidbit is talking about an attack on a United States Navy technical research ship by the Israeli Air Force in June of 1967 that killed 37 crew members. Israel apologized for the attack, calling it an error, and said they mistook the ship for an Egyptian ship. Both the US and Israel conducted an investigation and found the attack a mistake. The Israeli government paid the U.S. $3.32 million to compensate the families of those killed.

Since the attack, survivors and conspiracy theorists have questioned the investigation. It has also managed to become a part of anti-Semitic speech and used to claim that Israeli forces purposely attacked a US ship.

Favre isn’t the only one that has been tricked by the white supremacists.

According to BuzzFeed, Cameo has banned the GDL from using the site and have removed all the video they commissioned.

Favre put out a statement about the incident on his Facebook page, saying,

Like most Americans, I am sickened by what these groups stand for and concerned about their role in fueling today’s negative political climate. The Cameo request from this organization is a prime example of how these groups are misusing social media to promote their agenda. I thought I was creating a message to support the brave men and women of our military forces. Had I understood the source of the request, I never would have fulfilled it. All of us — myself included — need to be vigilant to protect this country from these dangers.