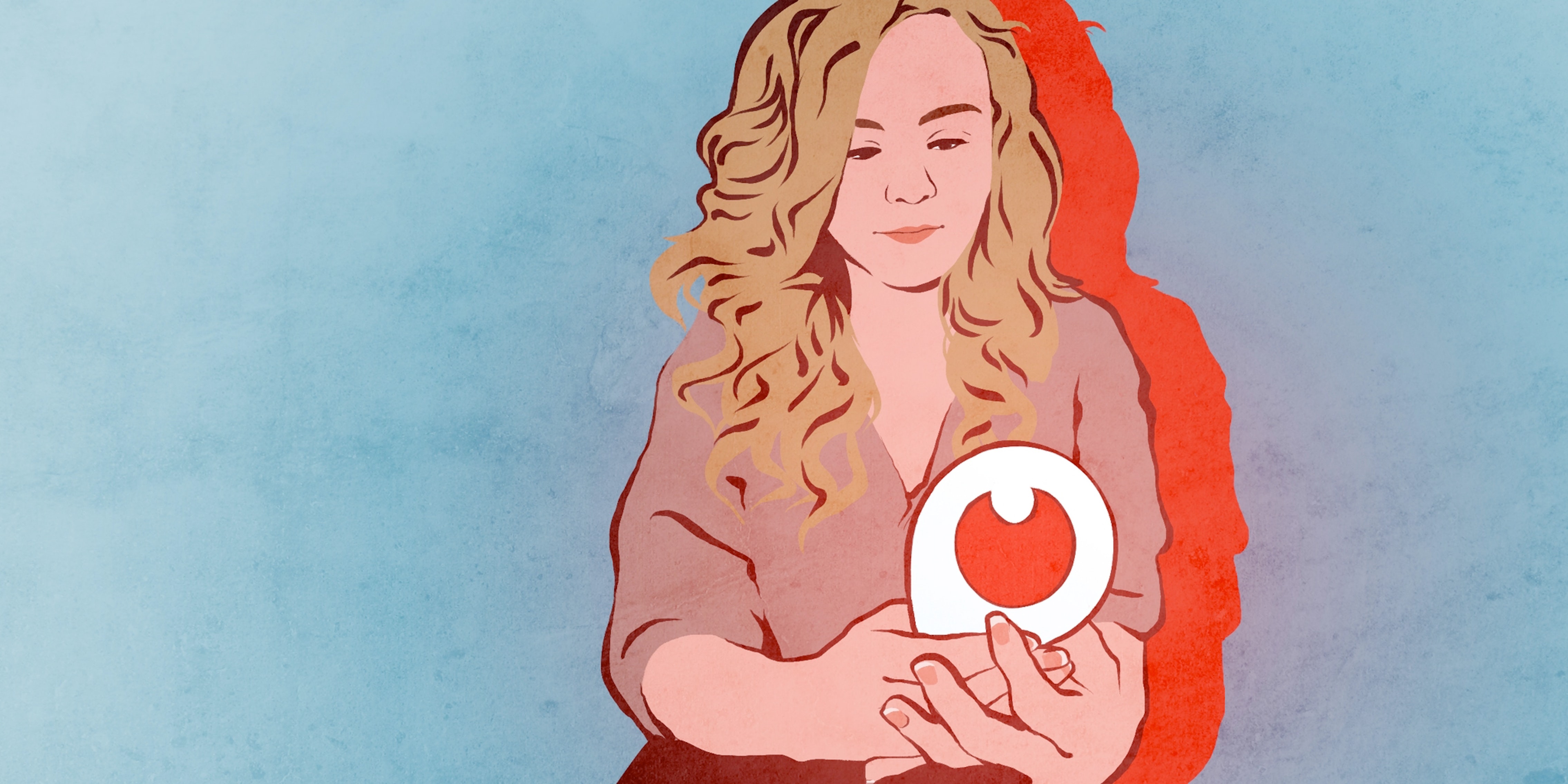 Crying on camera is a new experience for Bree Olson.

It is in this safe space, hair pulled back, T-shirt loosely hanging off her frame, that perhaps Olson is able to be herself for the first time in her adult life. 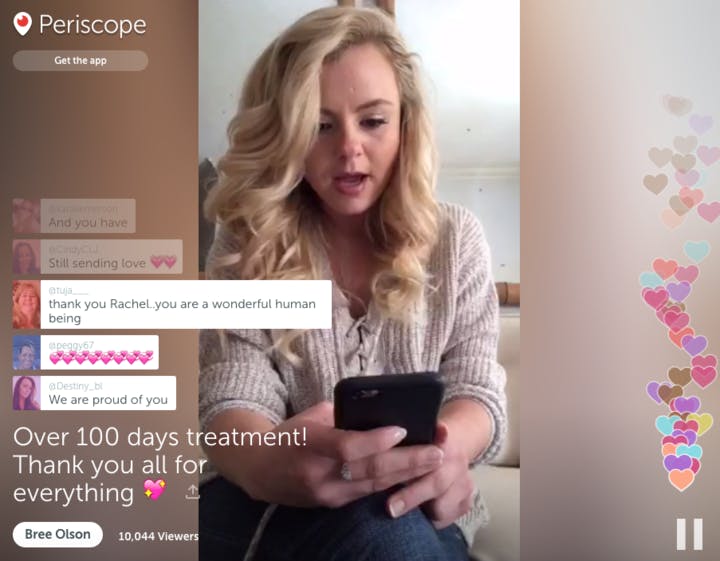 Recently, Olson’s Periscopes have taken on an intense emotional charge. With the help of her newfound community on the social media platform (who pooled money on GoFundMe), Olson recently underwent a 45-day inpatient treatment to wean herself off the anti-anxiety medication Klonopin, which she’d relied on for 11 years. She was also forced to face her intensely traumatic childhood, including a mother with “terrifying” untreated schizophrenia. “The memories that came up for me,” she said on Periscope, “were things I had worked so diligently to forget.”

Olson is done pretending like everything’s fine, though. Months away from turning 30, she’s only now just beginning to enjoy the freedom of self-definition, of talking openly about who she really is and the not-so-sexy experiences she’s had.

My friends make fun of my style all the time but I don't care, I do what makes me feel beautiful. Be you, not them.

Had you ever been in any kind of program like that before?

No. More than anything, I was able to get off the Klonopin I had been on for 11 years. It’s just crazy that doctors would prescribe something that’s so addictive. So that was at the forefront, but even more than that, I was extremely depressed and had so much anxiety, and I really wanted to get that under control. It was getting to the point where it wasn’t tolerable anymore. And now it’s a complete 180. It’s so much different.

If anything, I feel like people can relate. I don’t know anyone that doesn’t have a family member who’s dealing with depression and anxiety, or who isn’t dealing with it themselves. It’s so common. And people are curious to see how it can change things and make a difference when you can get an extensive amount of help.

I feel like I would have done it a long time ago if I had known how lucrative it was. With camming, you don’t have to leave the house. You work three hours a day. There’s no one touching me. I don’t have sex with anyone else. I don’t even get naked most days.

It was an extremely difficult childhood. And it was validated when I had counselors tell me they couldn’t believe I didn’t die somewhere with a needle in my arm—it was some of the most traumatic things they’d heard. They told me I needed to continue, and I listened to them because I wanted to be successful. I wanted it to stick. I never wanted to feel the way I felt before I went in.

To go through this intense process and talk about it publicly at the same time is very brave.

I wanted to raise awareness. I thought because I had a prescription for my meds and I’m not out partying, [that I had it under control]…but that can be just as damaging. And I can’t believe how many people have come forward and told me they’re also on Xanax or Klonopin or Ativan some form of benzodiazepine. It’s so addictive, even if you’re taking it just to sleep. People go through withdrawal and sometimes don’t even realize the symptoms they’re having. I thought that because a doctor was prescribing it, it was OK.

They say in rehab that it’s the most difficult thing to come off of, that it’s worse than heroin. I didn’t believe them until I started withdrawal, and it was a nightmare.

Also, not having cellphones and computers, that really helped me heal. Before that, I was on a screen at all times unless I was in the shower. And even then I was like, “I can’t wait to get out and see who’s texted me and who’s on Instagram.” Now I stay away.

I’m such a homebody, that will never change. I had to determine how much of staying home is healthy versus just being a homebody who prefers to be alone. I spend my time just cleaning, reading, and meditating—which sounds so hippy-dippy but it works, which is why so many people do it.

Definitely not. My first kiss was with a girl, my first everything was with a girl. I had a four-year girlfriend all throughout high school until after I graduated. While I was in the industry, I leaned more toward men. Obviously, I was always open, which was crazy coming from a super small conservative town in Indiana. I was always the only person who was out, and that itself was a real challenge.

But the thing that was really the biggest challenge was not being able to be who I was in terms of my gender identity. I have always felt like I leaned more toward male than I did female, but I was such a cute young girl. It was so confusing to really push toward that, because I was always rewarded for looking and acting a certain way. So much of that was a facade for other people.

But I guess I’m still finding myself. I’ve come to peace with the fact that in 2016 I don’t have to pick. I don’t have to choose one or the other [in terms of gender expression]. I don’t necessarily have to dress the way that I feel inside, because, honestly, I haven’t done that yet. All I really have to say about it is, it’s 2016 and I can just be a badass assertive woman.

It sounds like what you’re describing is a nonbinary or genderqueer identity. It also sounds like you started out very openly queer, and then got into this industry where you had to be extremely feminine.

Yes, absolutely. I was rewarded so much for being feminine—in praise, in money, and in the attention. Dealing with women is so much more difficult. Like Tinder, for example. I can swipe right on hundreds of women on Tinder and only get two matches, but I can switch over to men and get hundreds of matches. My ego! I need validation sometimes. I’ll toggle between the two because I can.

And to be honest, it’s easier here in L.A. Of course, it’s OK [to be LGBT] and be accepted. But going back to Indiana, it’s still completely frowned upon.

Wait, you’re on Tinder?! How is that even possible—aren’t you recognized all the time?

Not really. L.A. is so much more chill. But there is one thing: Dating women after doing porn—what a nightmare. They’re so less cool about it. Men are easier. If I get a good woman, that’s my longest relationship and I’ll stick with it. But it’s hard to come by, it really is.