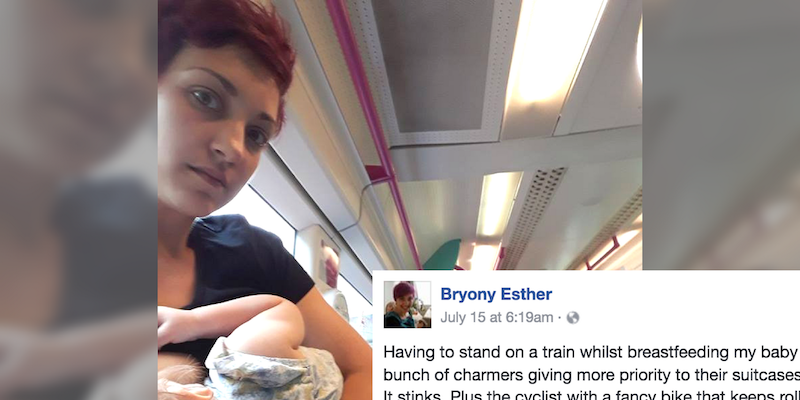 Unfazed commuters wouldn’t give up their seats for breastfeeding woman

It's reminder to us all.

Toddlers are heavy li’l humans, and that’s very evident, especially to the mothers who nurse them. Understanding such qualms, Facebook users have rallied around one mom who was left standing to breastfeed on a packed train while other commuters remained silent.

Despite looking obviously taxed by such a task as breastfeeding a 15-month-old, Bryony Esther from Essex, England wrote on Facebook that male commuters took up seats with a bike and luggage and didn’t offer her a seat.

The mother, who also had her two other children with her during the commute, recorded another man gawking at her breastfeeding, too, and said the bicyclist’s ride kept rolling into her as he sat in a seat for the elderly and people with disabilities.

In a plea to Facebook, Esther shared a photo of the scene, writing about her unfortunate time with “the lovely bunch of charmers.”

“Having to stand on a train whilst breastfeeding my baby thanks to the lovely bunch of charmers giving more priority to their suitcases and rolling joints!” Esther wrote. “It stinks.”

“The fact [is] I stood by them for a few mins and then asked if I could please sit where the suitcase was and yet they ignored me completely,” Esther wrote of another group of commuters. “The suitcase was being used as a surface to roll their joints. Then they stared at me for ages!! Disgusting excuses for human beings.”

Esther wrote that this wasn’t the first time she had encountered selfish seatmates on a train—in April 2016, at eight months pregnant, commuters also remained in their seats while she rode to the hospital. A friend had told her to take a photo of the situation “so their mothers can see,” so this time she did.

Esther’s issues with inconsiderate riders were quickly shared by Facebook users who understood her qualms with public transportation.

“I used to give my seat up quite often to mums/older people/young kids but so many blokes in suits would just hide behind their paper,” one commenter offered, also giving some passengers the benefit of the doubt. “Of course I don’t know their story, they could have only one leg or be mid-treatment for something exhausting and painful, but the number of them that behaved like that leads me to think it was mostly just selfish behavior!”

“I remember many journeys on the train breastfeeding standing up even while heavily pregnant. It’s not a great feeling,” another woman sympathized. “Sorry you have experienced the same.”

Unfortunately, demanding a seat from a careless commuter is easier said than done, or even accomplished. But perhaps Esther’s post will remind train riders to be more vigilant of the people around them who need assistance—particularly breastfeeding women with two children in tow.