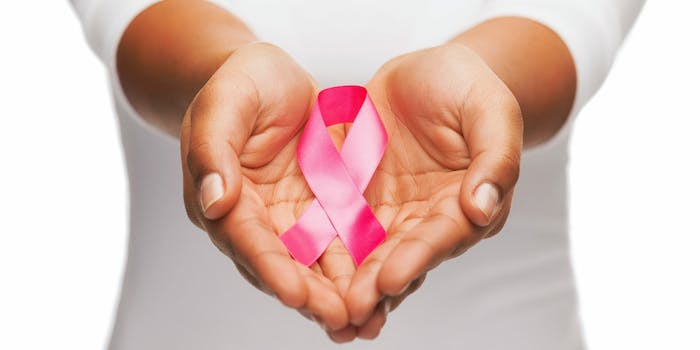 Organizations are pushing harder to close the racial disparity gap.

If you are a Black woman in the United States you are 42 percent more likely to die from breast cancer than a white woman.

A new report released by the American Cancer Society, during Breast Cancer Awareness Month, found overall death rates from breast cancer in the U.S. have decreased by 39 percent between 1989 and 2015. However, there are clear differences in mortality rates across racial and ethnic lines, particularly for Black women.

Although the report found that white women get breast cancer at a higher rate than Black women, Black women are much more likely to die from it. According to the American Cancer Society (ACS), this is partially due to inequity, lack of access to health care and treatments, and poverty.

Carol DeSantis, director of breast and gynecological cancer surveillance at the American Cancer Society and the primary researcher of the report, told the Daily Dot via email that the 39 percent decrease in breast cancer deaths resulted from earlier detection and advances in treatment—but not all people have had access to these advances.

“In the 1980s, there were advances in chemotherapy and other forms of therapy,” DeSantis said. “Before the ’80s mortality rates were pretty even across ethnic and racial groups. After the 1980s, you can see the shift to Black women having higher death rates than white women.”

The report clearly states in its summary how to lower these rates and give everyone an equal chance at health: “Improving access to care for all populations could eliminate the racial disparity in breast cancer mortality and accelerate the reduction in deaths from this malignancy nationwide.”

DeSantis said the ACS strongly advocates for increasing access to health insurance coverage and has several programs to help different demographics of people gain that access.

“We work with states and cancer control plans to have programs that help women navigate the very complex process and treatments after a cancer diagnosis is made,” she said.

The organization has invested more than $95 million in disparities research between 1982 and 2013, and provides 391,886 mammograms for Black women a year, according to its site. “Where you live should not determine whether you live,” so goes the motto for Komen’s initiative to conquer inequities.

Suzanne Stone, executive director of the Susan G. Komen Austin affiliate, told the Daily Dot over email that the organization not only works at the national level to combat racial inequities but also at the local level. She too emphasizes the importance of accessibility to good healthcare and healthcare education.

“If you don’t have health insurance or good health insurance coverage, then there are other financial responsibilities, like putting food on the table for your family, that will be prioritized over getting a costly mammogram,” Stone said, as mammograms “covered” by moderate insurance plans can still cost $200-300 out of pocket.

According to Stone, if Black women don’t get screened as often as other groups, then they typically do not catch breast cancer in the early stages and by the time they get diagnosed, it is too late.

“If breast cancer is caught between stage zero and stage two, there is a 99 percent chance of living for the next five years,” Stone explained. “If cancer is caught at stage three, there is only a 60 percent survival rate. If caught in stage four, then you will die—maybe tomorrow or maybe next year, but stage four is the one that kills 40,000 women annually in the U.S.”

To try to battle the disproportionate mortality rates among Black women, Komen Austin works with community partners to educate residents and help fund mammograms. This includes Circle of Promise Austin, a movement to prevent and help Black women with breast cancer that functions under the African American Alliance for Health in Central Texas, and Huston-Tillotson University, a historically Black college located in Austin.

Advocacy is also a huge part of what Komen Austin does, being that it is located in the capital city.

“When the Texas legislature is in session, we advocate to our representatives and try to encourage any legislation to make sure mammograms are a part of it and that women continue to be cared for and funded through Medicaid and by other health insurers,” Stone said. “On the national level, we [at Komen] lobby on behalf of all women everywhere.”

“We work to ensure that the burden of protecting oneself and one’s family from environmental exposures is not placed on individuals and we work to enact protections that will ensure all women, including the most vulnerable and those without resources to buy so-called ‘safer’ products are not exposed,” executive director Karuna Jaggar told the Daily Dot.

At its heart, Jaggar said, “breast cancer disparities stem from a complex interplay of economics, racism, and discrimination that lead to a variety of social injustices, including major inequities in healthcare. And our work to reverse these inequities is at the core of our work for system change.”