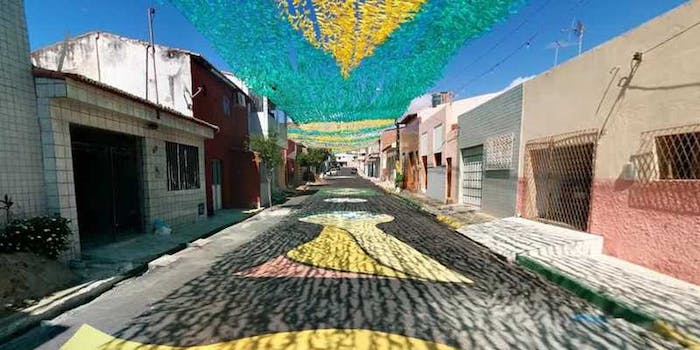 Can't afford a plane ticket to Brazil? This is the next best thing.

You don’t need an overpriced plane ticket and hotel room anymore to bear witness to the ways in which Brazilians have prepared their streets for the month-long celebration of the World Cup: “Brazil’s Painted Streets,” a Google Maps-based project, brings the spectacular yellows, greens, and blues of neighborhoods across the host nation to you. Sort of.

Fans in attendance are encouraged to contribute to the project using Google’s camera app for Android. If users upload photography of Brazil’s anti-World Cup street art or the country’s increasingly-oppressed favelas this could be a wonderful experiment in citizen journalism; if they don’t—or if they do, and Google chooses not to display such images—it’ll just be another part of the pro-FIFA propaganda machine we’ve all come to know and love.

In the meantime, you can also use Google Maps to explore each of the World Cup stadiums.