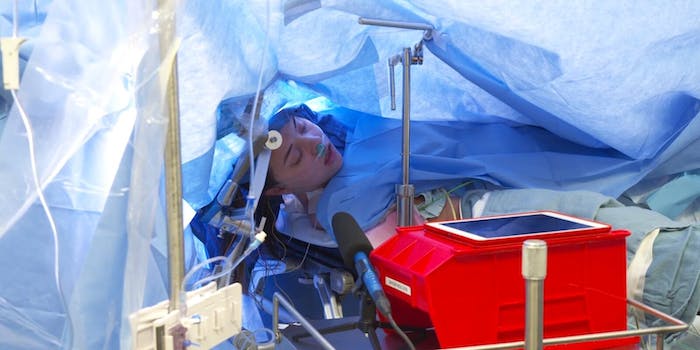 This brain operation might be the first of its kind to be live streamed.

Many individuals take to social media to spread messages of hope, whether it’s through tweets, posts, or videos.

Texas resident Jenna Schardt, 25, decided to take a unique approach to spread her own message after she was told she would need brain surgery.

She live streamed her brain operation on Facebook, where thousands of users tuned in to view.

The chain of events first began when Schardt, an occupational therapy student, suddenly lost her ability to speak. After receiving a medical examination, doctors found that a large number of blood vessels had formed inside of Schardt’s brain, which was impacting her speech and could potentially cause seizures. She’d need surgery to remove the vessels.

Schardt was determined to have her operation live streamed in order to provide comfort and hope to other individuals dealing with similar situations. The Methodist Dallas Medical Center was able to comply with Schardt’s wishes and broadcasted a Facebook Live feed as surgeons removed the mass of blood vessels from inside her skull.

The actual work of the procedure was not shown up close due to Facebook’s policies regarding graphic content. Instead, footage showed Schardt speaking with the medical team when she was awake for parts of the operation.

It’s a common practice for patients to be awake during certain operations, as it allows the surgeons to test how their procedures are affecting the patient. The live stream also featured Dr. Nimesh Patal, the medical center’s chief of neurosurgery, who provided commentary and answered questions on the feed.

This particular brain operation might be the first of its kind to be live streamed. Other procedures have been live streamed in the past, such as a 2016 cosmetic surgery.

In good news for Schardt, the doctors deemed her operation to be successful and she’ll be able to leave the hospital soon.