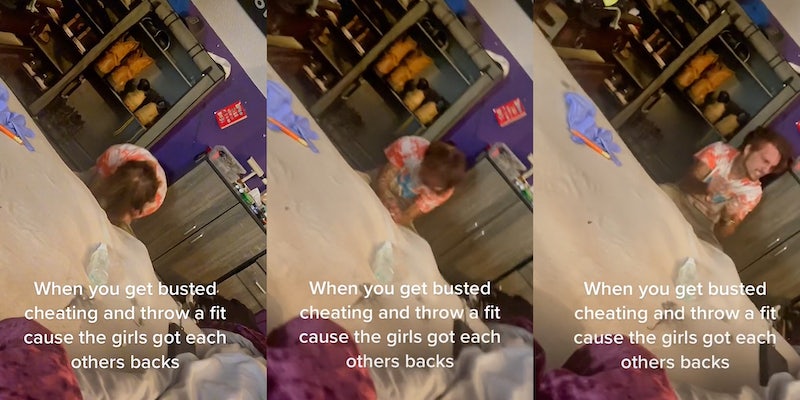 ‘I would send this to the next person he tries to date’: Woman films boyfriend violently sobbing after she caught him cheating

'He’s only upset he got caught.'

A TikTok video of a woman allegedly recording her boyfriend’s reaction to her catching him cheating has gone viral.

In an eight-second clip posted by user @wwydfakb1, a girl films her alleged boyfriend rocking himself while sobbing incoherently. By the end of the clip, he lifts his head up and looks angry. The overlay text reads, “when you get busted cheating and throw a fit cause the girls got each others back.”

The video has racked up 1.6 million views as of Tuesday. Many users jumped to the alleged girlfriend’s defense, bashing the boyfriend’s behavior. Most users joked about the boyfriend’s dramatic sobbing.

“A CHILD THATS A CHILD,” one person wrote.

“Me when I was 10 and got caught with my DS during bedtime,” a second person commented.

“Not him throwing a tantrum,” a third said.

Other users shared how they would have reacted if they were in the girlfriend’s position.

“I would start laughing so hard,” one person wrote.

“I would start livestreaming since he wants the attention so badly,” a second stated.

“I would send this to the next person he tries to date,” a third said.

“I would send him this video of himself every time he tries to reach out to me,” another commented.

Other users shared their own experiences of catching their exes cheating.

“My ex did that and to calm himself he started to say sigma chi poems and texts and I’m like,” one shared.

“My ex used to rock like this and hit his head against the wall when I’d catch him. Like “how dare you catch me,”” another user said.

In a follow-up video, the TikToker posts a second part where the camera is zoomed on the bed. The boyfriend can be heard sobbing, “you fucking bitch.” The overlay text reads, “Cry me a river bro. Ladies know your worth!!! Crybaby got mad cause he doesn’t get his way.”