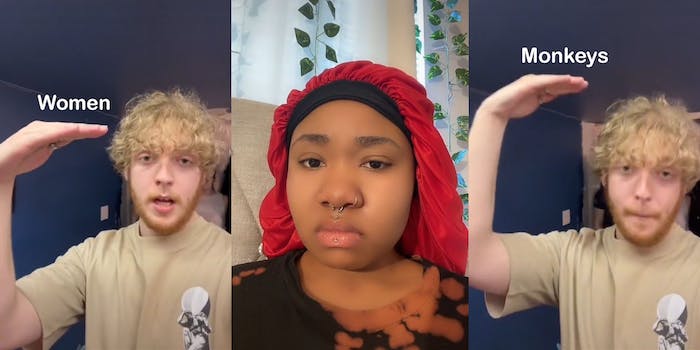 ‘Jokes like this will never be funny’: Boyfriend compares women to monkeys in racist TikTok

A man is being called “disgusting” for comparing his Black girlfriend to monkeys in a now-deleted TikTok.

According to a TikTok reply clip from @theerawestgem, TikToker @s.i.t.e11 allegedly posted a clip where he pushes a woman away and says, “Just kidding.” He grabs a stuffed toy monkey and puts his hand out, saying, “Women.” He then raises his hand and says, “Monkeys,” as if to imply that monkeys are better than women.

@theerawestgem #stitch with @s.i.t.e11 why do y’all do this? “Jokes” like this will never be funny.. #blacktiktok #foryoupage #fypシ ♬ original sound – GEM 💎

“Why do y’all do this? ‘Jokes’ like this will never be funny..” @theerawestgem wrote in the caption.

@theerawestgem posted her TikTok on April 10. As of Tuesday, the TikTok has over 14,000 views.

The comment section lit up with people upset over @s.i.t.e11’s joke. “We just got set back like 60 years.”

“That is so weird , how do ppl laugh at that,” commented another person.

Some people felt like the joke was “racist,” considering that the woman in the video is Black and he compares her to a monkey. Dehumanizing Black people by comparing them to monkeys and other apes has been a longstanding and extremely offensive racist trope.

According to the comments, @s.i.t.e11’s TikTok had over 1.1 million likes about a week ago. The video is now missing from his page.

The Daily Dot has reached out to @theerawestgem via email and @s.i.t.e11 via TikTok comment.