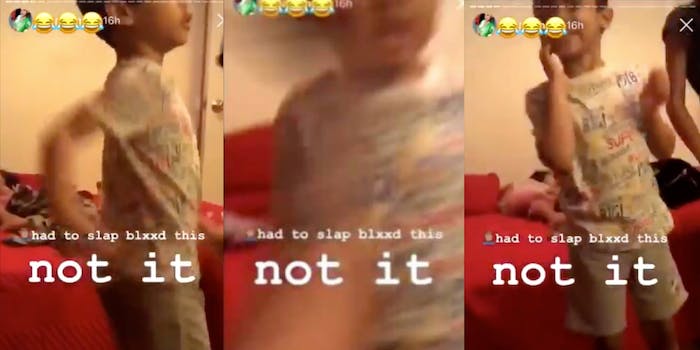 The boy's family came out in his defense after a video of the incident went viral.

In a viral video, a boy gets slapped in the face and is called homophobic names by his babysitter—all for doing the “Savage” TikTok dance alongside a girl.

“You don’t do that shit. Fuck wrong whichu? Gay ass bitch,” the woman says after smacking the boy.

The boy holds his slapped cheek as he recoils from the sting and immediately stops imitating the video. He stares longingly at the TikTok he’s not allowed to dance along to.

The video was originally uploaded by Twitter user @ylo_gang_ with the caption, “I’m crying,” seemingly laughing at the situation rather than calling it out.

But in a heartwarming turn of events that we don’t often see online, the boy’s alleged family came out in his defense. They’re also holding the babysitter accountable for their homophobic actions.

“My godson comes from a loving home & whether he’s gay or not we love him regardless,” a person claiming to be the boy’s godmother wrote in a tweet.

The boy’s godmother explains in a thread that the boy’s mom didn’t know about the incident until after she showed her the viral video. The police are now allegedly involved and the babysitter will be turning herself in.

“We always let him be himself. His mom thought she could trust this person to watch them for 10mins & this happened,” his godmother said in a tweet.

The thread includes a two-minute video of the mom addressing the situation while her son sits in her lap with a PlayStation controller in his hand. One of the first things she clears up is that she wasn’t the person behind the camera.

“Everybody thinks it’s me and everybody was saying all these negative things about me. You know, I’m not worried about none of that. My son is fine, I know he’s good over here. I know he’s being loved right,” the boy’s mom says in the video.

She goes on to explain that her sister—aka the boy’s aunt—was the one babysitting. While she “can not speak for her actions,” referring to her sister, the incident is “being handled,” the mom says in the video.

The boy’s mom said that when she first found out what her sister did she started blaming herself. She reminds herself that she wasn’t in the house when it happened and had no way of knowing. Her son and sister never mentioned the situation.

“I’m just hoping and praying they don’t take my babies away, cause I’m not ready to lose them,” the mom says.

While there are the usual homophobic trolls commenting on the thread, hundreds of people are posting words of appreciation for the women handling the situation with love and accountability.

“WE LOVEEEEEEEEE TO SEE IT!!! omg the video did not sit well with me at all!!! Give him extra love and kisses,” wrote @_Janiee.

“Thank you so much for this update. Please pass our thanks on to his mother for protecting and standing up for her son,” wrote @ishenarobinson.