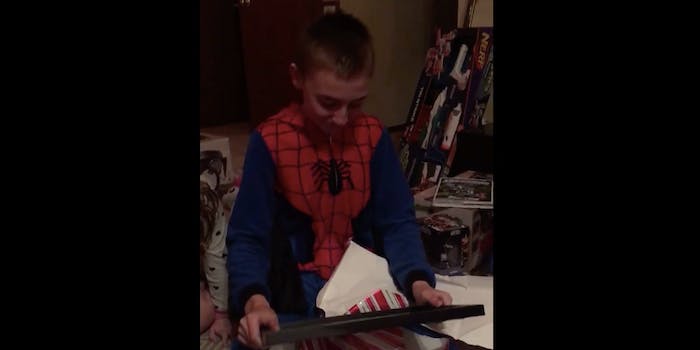 This boy opening his adoption certificate is the sweetest Christmas surprise

What some kids take for granted, 11-year-old Landon has not. As the eldest in his blended family, he got a little choked up this Christmas when he opened the most meaningful gift of all: an adoption certificate.

The heartwarming video has been viewed over 143,000 times since Landon’s mother, Janelle Rice, posted it on Facebook Christmas morning. She told Inside Edition, that Landon’s stepdad, Daniel, has always treated her son as his own and now they’re just making it official.

“This is to certify that Landon Ryan Rice will be formally adopted by Daniel Rice February 2017,” the certificate read. “It’s not flesh and blood, but the heart that makes us father and son.”

Janelle said she met Daniel when Landon was 5 months old, and the couple has since had two other kids together.

“Landon says he’s just really happy, and very proud that he will get his last name changed to ‘Rice,'” she told Inside Edition. “I think it is just a piece of him that was missing, but we had no idea that this would be such a blessing to him!”