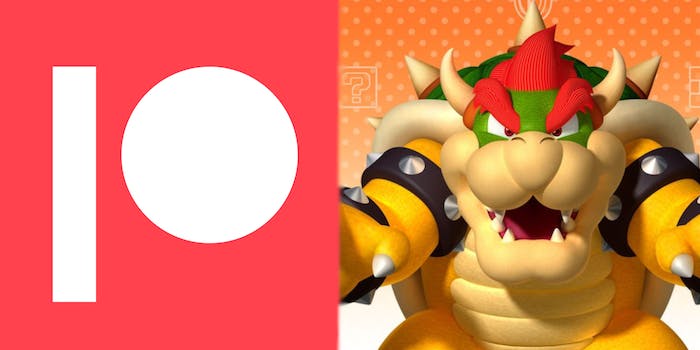 It's very realistic. And maybe canon.

Interested in animating a hyperrealistic 3D version of Bowser’s penis from Super Mario Odyssey? If you’re an adult artist on Patreon, you may be out of luck.

According to 3D adult modeler AkkoArcade, Patreon pulled a 3D prop modeled after Bowser’s penis from the site after it received a copyright claim from Nintendo of America.

The prop, which was specifically designed for use in adult Source Filmmaker videos, features an engorged red shaft with spikes across the testicles, tip, and girth. A black, spiky cock ring adorns the base, reminiscent of Bowser’s studded collar.

“This peepee got claimed by Nin tendo,” AkkoArcade tweeted on Saturday. The post has since received over 30,000 likes and over 4,800 retweets.

The 3D model, which was uploaded in June 2018 as “Bowser Standalone Prop,” has since been uploaded publicly for free.

It remains unclear if a Nintendo of America employee spotted the lewd Bowser model out in the wild, if the company caught the post with a bot, or if a third-party pretended to file the DMCA notice on Nintendo’s behalf. “Theory has it, its just random people just claiming to be Nintendo,” AkkoArcade tweeted. “And Twitter and Patreon don’t really care.”

Regardless, several fans have since joked that AkkoArcade’s Bowser cock must be an accurate representation of Bowser’s penis if Nintendo filed a copyright claim.

Nintendo has a terse relationship with fan creators. While the company is generally permissive toward fanart, fanmade games, films, and ROM sites are regularly targeted with DMCA notices. More recently, the company came under fire after Nintendo filed a copyright claim against the Etikon Nintendo Switch Joy-Con, in honor of the late YouTuber Desmond “Etika” Amofah.

“Nintendo is [a] huge risk on Patreon, if not everywhere on Western platforms. They’re definitely trying to control their image at every level. Lots of artists have been threatened off the platform or into submission for it,” one ex-Patreon adult artist who requested anonymity told the Daily Dot. “Technically, pornography is a very clear-cut example of creative parody, which is a first amendment right.”

Update 11:11am CT, April 13: When reached for comment, AkkoArcade argued the post was most likely pulled after a bot caught the picture, as several of the artist’s non-Nintendo work-in-progress creations were claimed as well.

“There is a bit of abusing when it comes to the copyright, like [on] Twitter and what not,” AkkoArcade told the Daily Dot. “And there isn’t anything like small users such as myself can do to fight it. Like I said, I don’t think it’s actually Nintendo [who filed the claim], but some nefarious user.”