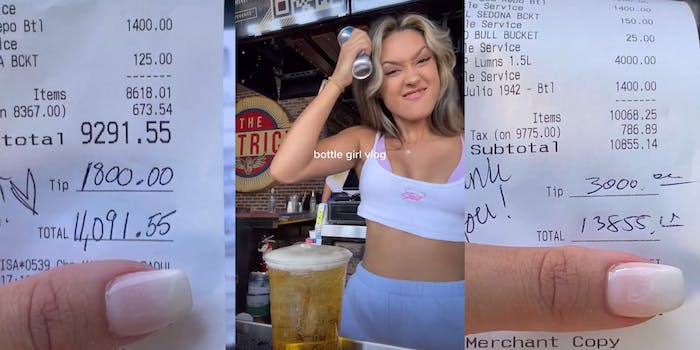 ‘I’m in the wrong profession’: Bottle girl shares how much she makes in tips

'Are you guys hiring? Asking for me.'

People spend a lot of money on drinking at bars, clubs, and restaurants. Even during the pandemic, when many eateries and nightclubs were closed, the industry at large reportedly managed to rake in a whopping $20.04 billion in 2020. In 2021, even with many social distancing and COVID-safety protocols in place, that number jumped to $25.09 billion. It’s estimated that the average U.S. drinker spends $579 on alcohol annually.

But this is an average sum, and if you like to go out and party at various and sundry exclusive venues, then you know how easy it is to rack up a hefty bill that puts that $579 figure to shame. And if you’re employed at one such exclusive location where big ballers like to flex their credit card balance limits, there’s a good chance you’re going to be able to walk away with a hefty tip after a single day’s work.

This is something that TikToker Nina Angelina (@ninageruntho) demonstrates in a now-viral clip. The video features a smash cut of her working as a bottle girl in her second week at a party venue in Scottsdale, Arizona.

Nina starts the video with a Red Bull can getting emptied into a cup and crushed, with a text overlay that reads “Bottle Girl vlog.” Nina dances to Taylor Swift in front of a pool and then reveals that she was assigned the “cabana section for the first time ever.”

Viewers are then introduced to a section that looks like a VIP area. Many clubs will typically require minimum bottle service purchases at these areas in order for individuals or groups to book a specific seating area. Minimum gratuities are often associated with these tables, so servers can expect to earn more when they’re stationed in these areas.

Scottsdale, along with Phoenix, are known as Arizona’s most active nightlife hotspots, according to Travel Triangle. Trip Advisor also stated that Scottsdale is the place to be if you’re aiming to party hard while in Arizona.

This could explain the large tips Nina received on two specific tickets while working the cabana area in this particular TikTok. The first bill she shows carries a subtotal of $9,291.55. The patrons left a $1,800 gratuity, bringing their total to $11,091.55.

Naturally, there were tons of TikTok users who wanted to know how they could get in on that sweet income-earning potential, with many reconsidering their own employment choices.

“How do you even get into this kind of work is the question,” one asked.

“I’m in the wrong profession,” another said.

“Are you guys hiring? Asking for me,” a third quipped.

Nina called it the “perfect job for your 20s” in the comments section.

It’s unknown as to what the actual payout structure of the bills Nina showcases is, however. Bottle girls are encouraged to sell bottles to tables and will earn a “commission” (their gratuity). Bottles are almost always much more expensive at nightclubs and party venues: Tableist noted that prices can range anywhere from $425 to $7,000 a bottle, but there really isn’t any limit (take the $500,000 New Year’s Bottle Service event at Hakkasan Las Vegas, for example).

There are also several first-hand write-ups from bottle service workers on the internet. One Atlantic City-based server said that it helped pay her way through college, and she learned quickly she was “great at forcing a smile and putting on an ever-so bubbly persona.”

Another New York Post article interviewed a bottle service worker who echoed that the earning potential is “amazing” and that, during a particular point in time, she was making anywhere from $150,000-$160,000 a year.

Ziprecruiter, however, lists the average annual salary for a bottle service employee in Scottsdale at $43,152.

The Daily Dot has reached out to Nina via TikTok comment.