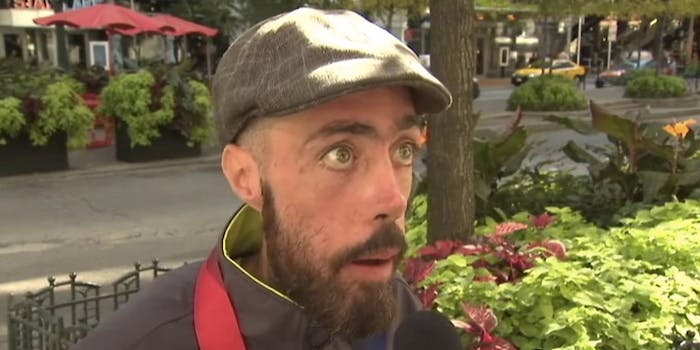 Runner with muscular dystrophy finished the Boston Marathon at 4am

Maickel Melamed, a college professor from Venezuela, crossed the finish line for the Boston Marathon at 4:00 this morning, a grueling 20 hours after the starting gun went off yesterday morning.

The 39-year-old suffers from muscular dystrophy, which attacks his muscles and nervous system, yet he’s a seasoned marathon runner who has completed in races around the world. He’s traveled to New York, Berlin, Chicago, and Tokyo to compete in the 26.2-mile leg-taming event.

As he drew closer to the finish line, the crowd around him grew despite the late hour. They were eager to see him through to the end, which they did:

Speaking to ABC News after a similar finish in the Chicago Marathon in 2013, Melamed explained the motivation behind his participation: “If you know you can do it, you have to do it.” Melamed wants to “spread a message of human dignity” by competing in and finishing these unlikely events, though he expects this morning’s finish to be his last before hanging up the racing shoes.

It was an honor to present #BostonMarathon runner, Maickel Melamed of Venezuela, with a medal for finishing the race. pic.twitter.com/EmNyVbr175

The rhetoric of the Boston Marathon is forever altered after the 2013 bombings that claimed lives and limbs of some runners. This year, bombing victim Rebekah Gregory successfully finished the race after losing her leg in the attack two years ago. Here’s the video of her crossing the finish line yesterday:

Actor and director Sean Astin had a similarly emotional experience finishing his long-distance run through Beantown. He dedicated his marathon to the youngest victim of the 2013 bombing, 8-year-old Martin Richard.