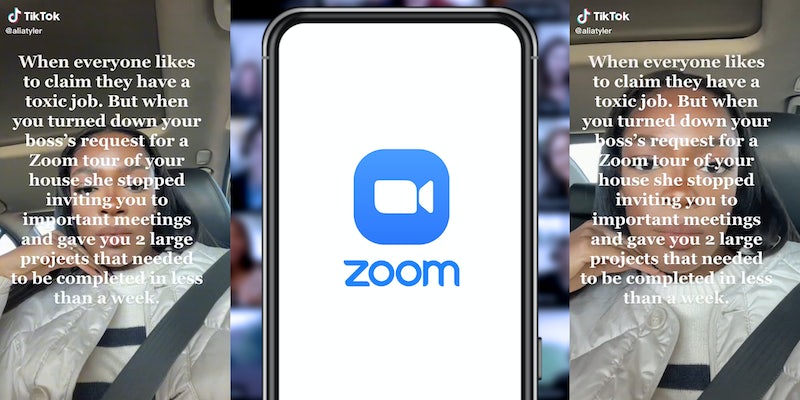 ‘Reason 736 why I quit’: Worker says boss retaliated against her after she refused to do a Zoom tour of her house

'I had a boss who in meetings would Google addresses to see people's houses.'

A worker said she refused to give her boss a tour of her house over Zoom, leading her boss to put an unsustainable workload on her plate and keep her out of important meetings.

In a video with over 45,000 views, TikTok user Alia (@aliatyler) explains part of the reason why she quit her job.

“When everyone likes to claim they have a toxic job. But when you turn down your boss’s request for a Zoom tour of your house she stopped inviting you to important meetings and gave you 2 large projects that needed to be completed in less than a week,” she wrote in the text overlaying the video.

In a follow-up video, she provides further context about what she says happened.

According to Alia, she tends to keep to herself in the workplace and not discuss her personal life when possible.

“I just don’t feel like my personal life has anything to do with my work life, so I like to keep the two separate, you know?” she says in the video.

She says this mentality did not mesh well with her boss, who continually allegedly asked Alia about her personal life. The conflict came to a head one day when the two were supposed to have a weekly check-in, Alia claims. When Alia was preparing for the check-in, she says she realized her Wi-Fi was down. She says texted her boss to inform her of the delay, then logged on a few minutes later when the Wi-Fi returned.

Upon entering the call, Alia says she apologized and reiterated her Wi-Fi went down, noting this also caused all of her smart appliances to disconnect.

This innocuous comment allegedly prompted a quick response from her boss, who showed curiosity about the appliances and asked for a tour of her home.

“So I said, ‘Um, I actually am not really comfortable with that,’” Alia recalls. After some more alleged pestering from the boss, Alia says she simply stated, “‘I’d rather just focus on work right now.’”

According to Alia, this resulted in a dramatic change in her boss. The boss allegedly suddenly demanded two large projects be completed in just two days, became unresponsive over email, and removed Alia from several meetings.

“Good news is, I no longer work there,” Alia concludes.

In the comments section, users supported Alia and shared their own stories of employers overstepping boundaries.

“Girl they did a game where they wanted everyone to snap pictures of their refrigerators and people guess who’s is who… mind you we work in HR,” alleged a commenter.

“I had a boss who in meetings would google addresses to see people houses. Asked me for my address and I said no,” recalled a second.

“We have a clause for teleworking that our jobs can show up and inspect our homes at any point as long as they give a 24 hr notice…that will be the day I either quit or return to office. because hell no,” claimed a further TikToker.

The Daily Dot reached out to Alia via TikTok comment.