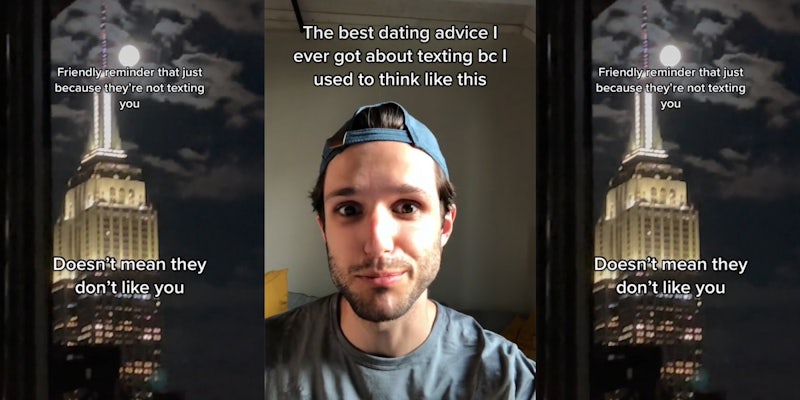 ‘When I catch myself overthinking text exchanges, I think of the boomers’: TikToker shares the best dating advice he received from a baby boomer

'TLDR: If someone makes plans to see you, they like you.'

A TikToker stitched a recent viral video that stated just because someone “isn’t texting you back, that doesn’t mean they aren’t interested in you.” In the stitched clip, Tyler (@tygreenmtn) shares some dating advice he learned from a baby boomer (someone born between the years of 1946 and 1964.)

The video received over a million views as of Wednesday, and seemed to be a valuable piece of advice for many viewers.

@tygreenmtn #stitch with @tapdatetheapp this!! we tend to think texting tells us everything but… #dating #datingadvice #texting #boomer #gaydating ♬ original sound – Tyler

“The best dating advice I ever got came from a boomer who was telling me about how people, before social media, before all the digital technologies that we are native on, how did they discern whether someone liked them or not,” he says in the clip.

According to Tyler, the boomer mentioned that while they still tried reading into what people said and their actions, before technology they could not remain in constant communication via texting or social media like today.

Tyler continues, “How you knew whether someone liked you was, ‘Are they spending time with you? Are they making plans to do stuff with you? Do they wanna see you, do they wanna hang out?”

“I know it may seem like duh, like people need to spend time with one another, but I think that we lose that perspective sometimes, ” Tyler says. “If someone’s not texting you 24/7, sure, that’s data, but when I catch myself overthinking text exchanges, I think of the boomers.”

Users in the comments had mixed responses to this take but were open and hopeful about this idea.

“TDLR [too long, didn’t read]: If someone makes plans to see you, they like you,” one viewer commented.

Tyler then replied saying, “Spending time together signals more about whether someone likes us than texting does.”

“I personally don’t like the idea of talking 24/7 because I’d be running out of stuff to talk [about] then it just gets boring, like talking about the weather,” another viewer wrote.

Others still weren’t in complete agreement with the notion.

“If they’re not texting they’re not interested. People make time for things if it matters to them,” one user argued.

The Daily Dot reached out to Tyler via TikTok comment for this story.