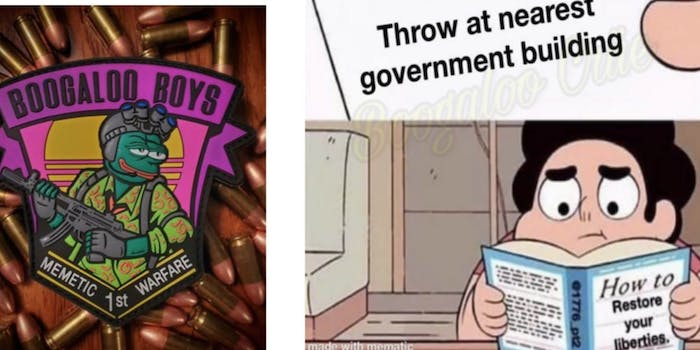 A right-wing, anti-government extremist movement is recruiting on social media to target political liberals and law enforcement, and promoting a violent rebellion termed the “boogaloo,” according to multiple reports.

The movement barters in memes.

According to researchers, as a loosely coordinated movement, “boogaloo” memes promote pro-gun, anti-government agendas and target new members on mainstream social media platforms—including Facebook, Instagram, Reddit, and Twitter, along with 4chan and other fringe sites—to bring forth a second civil war.

Their report, released Tuesday night, was created by the Network Contagion Research Institute (NCRI), an independent nonprofit group that tracks misinformation and hate speech over social media. NCRI has traced usage of the term to 4chan’s /pol/ board, one of the most racist and vulgar corners of the internet.

The paper “represents a breakthrough case study in the capacity to identify cyber swarms and viral insurgencies in nearly real-time as they are developing in plain sight,” writes John Farmer, a former New Jersey attorney general and current director of the Miller Center for Community Protection and Resilience at Rutgers University.

Though calls for a new civil war aren’t a new idea and have long circulated through various hate groups, the appropriation and development of the term “boogaloo” is novel in its use. NCRI researchers analyzed more than 100 million social media posts and comments wherein extremists are escalating anti-government and anti-law enforcement rhetoric across social media, via the use of memes.

The group also has established online associations and groups with tens of thousands of members. One Facebook group with 14,000 followers was recently removed.

The term “boogaloo” comes from the breakdancing film sequel Breakin’ 2: Electric Boogaloo, a cult classic that bombed at the box office. The film’s title, though, evolved into a sarcastic meme, describing any unwanted sequel, movies, or any other event. The term would catch on within the broader online gaming community, which has been known to include racist and anti-government subsets.

According to the Anti-Defamation League, the term’s increasing usage likely started with gun rights activists encouraging violence if the government were to “come for their guns.” In June 2018, for example, someone started a Reddit thread titled “Civil War 2: Electric Boogaloo,” highlighting a 2012 Facebook post by Gavin Newsom, then California’s lieutenant governor. In the post, he told the National Rifle Association, “we ARE coming for your guns,” which induced a response suggesting an outbreak of a civil war.

The group continues to “strategize, share instructions for explosives and 3-D printed firearms, distribute illegal firearm modifications, and siphon users into encrypted messaging boards en mass,” per the NCRI report. NCRI also shows how the movement and the term are being monetized through merchandise advertised, toward former military veterans, on both Facebook and Instagram.